In the mid-1870s, Pissarro embarked on a series of paintings dedicated to the rural worker, a subject that would occupy his attention for the next twenty years. Representing male and female figures at work and at rest, the paintings are not only beautiful studies in light, color, and character—they are also statements of Pissarro’s anarchist beliefs. To him, French capitalist society was rife with inequality, and urban workers’ energy was unjustly spent advancing the wealth of the bourgeoisie. In comparison, the life of the rural poor was rich with purpose and honor, based as it was on communal hard work and the sustainable production of food and clothing. In his paintings, Pissarro invested his subjects—the gardeners, harvesters, and washerwomen who were his neighbors—with the dignity traditionally reserved for elite patrons. Unlike the toiling peasants of Millet, Courbet, and other French artists dedicated to a “realist” vision of labor and struggle, Pissarro’s rustic characters work, chat, lounge, and enjoy each other’s company, suggesting that the life of the rural worker was fulfilling, pleasant, and, in the best sense, simple—a radical reinterpretation of the pastoral tradition for modern times. 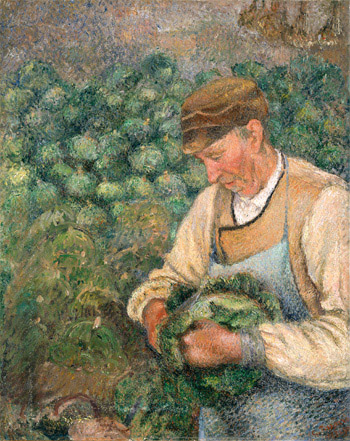 Pissarro never exhibited this painting in his lifetime, despite making extensive revisions to it in the mid-1890s. Significantly, the artist linked his own painstaking, repetitive work with the labor of the rural workers he paid to model for him. In this canvas, the outer leaves of the cabbages on the left are freely painted, while the cabbages in the background are neatly defined with thousands of precise brushstrokes. 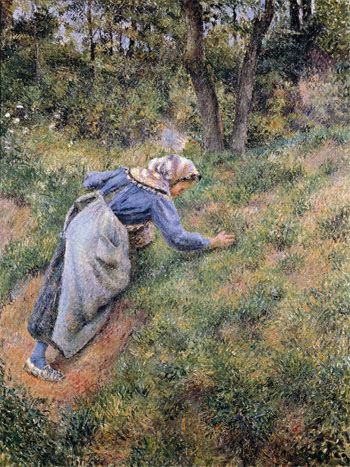 A true anarchist, Pissarro valued hard work, and he worked hard to represent rural labor. This painting’s surface is covered with thousands of touches of paint that appear woven together like a tapestry. Contemporary reviewers noted that the female figure seems unsteady as she leans over the grassy bank, though preparatory drawings indicate that Pissarro strove to find compositional balance between her limbs and those of the tree above her.