The Harvest is perhaps the largest tempera painting Pissarro ever made. He probably worked on it for at least a year before exhibiting it at the 1882 Impressionist exhibition. The composition comprises eight figures working in a panoramic landscape and shows a subject familiar in French genre painting: the grain harvest. While the subject is traditional, its mode of representation is modern. Pissarro chose a wide, horizontal canvas for his painting, similar to the format used by Degas for his frieze-like compositions of horse races and ballerinas. He included equal numbers of both sexes in this outdoor scene of collective labor. His harvesters move across the surface of the earth in a manner at once free and disciplined, apparently compelled to work by no one. Thus, Pissarro’s composition reflected his radical vision for a future without private property or forced labor.

Many of the preparatory drawings for The Harvest were kept together by the artist’s son Lucien and are now in the collection of the Ashmolean Museum at the University of Oxford. Several are shown here for the first time with the painting for which they were made, shedding new light on Pissarro’s process for making a modern figure painting. 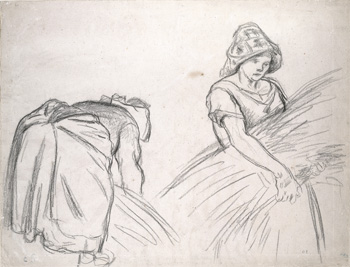