Pissarro was a leading member of a group of independent artists, including Renoir, Monet, and Degas, who banded together in Paris in the early 1870s to champion a new approach to painting in defiance of conventional artistic practice. Slightly older than his friends and sociable by nature, he served as a mentor to younger artists (particularly Paul Cézanne and Paul Gauguin) and was one of the primary organizers of the Impressionist group exhibitions that took place from 1874 to 1886: indeed, he was the only artist to participate in all eight exhibitions. Pissarro was among the most experimental and deliberate of the Impressionists, dedicated to the study of nature but often working on his canvases, drawings, and prints over many sessions in the studio. His commitment to the human figure, particularly the rural workers of the countryside around Paris, distinguishes him from contemporaries like Renoir and Degas, whose figure paintings focus more on the lives of city dwellers. 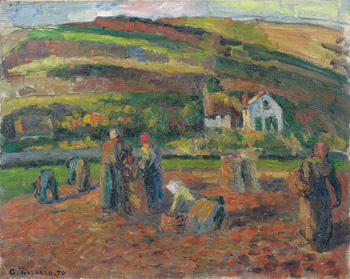 This small canvas demonstrates Pissarro’s desire to capture with spontaneity and directness a slice of contemporary life. Although the rural subject is still very much inspired by Millet, the chromatic intensity and broken brushwork exemplify early Impressionism. Typically, Pissarro was fascinated by the actions of the workers, whom he shows fully integrated into the landscape, as they tend to their labor with communal purpose.