The human figure has been considered the highest subject for artistic study since classical antiquity, and figure drawing had been an important aspect of formal artistic training since the Renaissance. During the second half of the nineteenth century, however, many avant-garde artists rejected traditional academic training for political and aesthetic reasons. Even so, some of these artists—including Manet, Degas, Renoir, and Seurat—continued to make drawings of the human figure as studies for their innovative representations of modern life. As a young man, Pissarro had drawn the human figure before receiving formal instruction, but after his arrival in Paris in 1855, he was taught to make academic life drawings using nude models. Later, following Degas’s example, Pissarro drew studies of people engaged in authentic, everyday activities, rather than relying on the static poses of hired models in the studio. This experience provided him with technical skills he needed to build his ambitious figural compositions of the 1870s and 1880s. Pissarro did not exhibit these drawings during his lifetime; they were not intended for public display or sale but as a part of his lifelong practice as an artist. 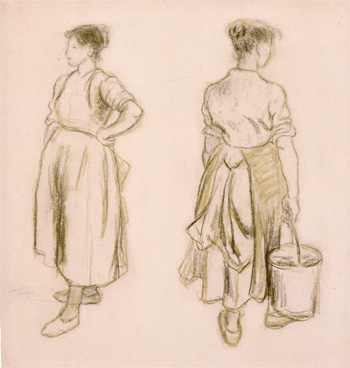 Many, perhaps even the majority, of Pissarro’s figure drawings show models standing or working.  This sheet shows the same model—probably one of Pissarro’s neighbors—viewed in two different poses that probably related to her everyday activities.