Pissarro was the only Impressionist who made figure paintings in which the domestic worker is the central motif. Pissarro’s wife, Julie, had been a servant in his mother’s house, but this fact was probably not a significant motivation for these pictures. More likely, he sought to portray service as an integral part of domestic life: not drudgery but healthy, clean, and comfortable work. As an anarchist Pissarro frowned on inequality among individuals. In his view all men, women, and children were equal, if not in abilities and appearance than in having the equal right to live without shame and want. Nothing in his pictures suggests social tension or bourgeois opulence. Rather, Pissarro’s maids and servants are attractive, well-fed, and seemingly contented. They are family members who—whether doing household chores or modeling—work for their host in an easy, reciprocal manner. 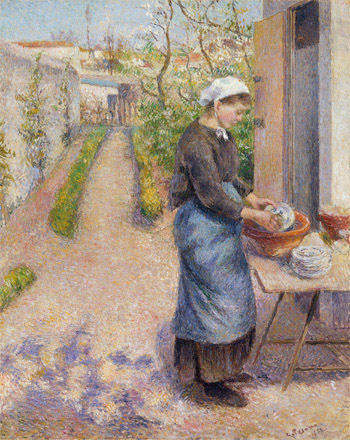 Pissarro’s niece Nini likely posed for the picture, but she was probably also actually washing the dishes when he painted her. He shows her wearing a simple cap and apron as she works at a makeshift table set outside the family kitchen, probably at the house in Pontoise. 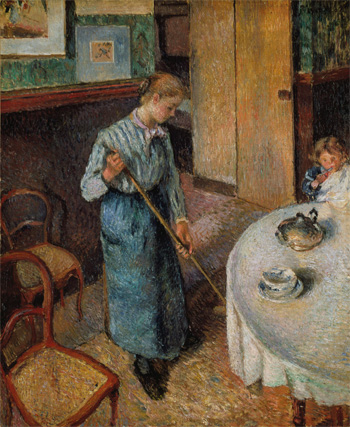 The setting of this intricately composed picture is the dining room of the Pissarro house in Osny, outside of Pontoise, northwest of Paris. The model for the maid was most likely the artist’s nineteen-year-old niece Nini; the little child seated in a chair with a spoon is his mouth is the artist’s son Ludovic-Rodo.