Pissarro painted his own portrait few times in his seventy-three years. The earliest of these, seen in the first gallery of this exhibition, shows the artist as a self-confident, if modest, middle-aged man. Sixteen years later, the artist etched his only printed self-portrait—a solemn image made around the time of his mother’s death. Pissarro’s remaining self-portraits were painted near the end of his life, during a time that was marked by critical acclaim and improved material wealth, but by personal hardship as well. He suffered from chronic tear-duct infections, his son Félix died of tuberculosis in 1897, and tides of anti-Semitism swept France in the wake of the Dreyfus Affair, offering little hope for the anarchist’s dreamed-for revolution of liberty and equality. And yet, Pissarro endured, continuing to paint until the last weeks of his life. While only one self-portrait bears any direct reference to Pissarro’s profession, in all of them he seems to be quietly reflecting on his lifetime of experiences and artistic achievements. In the end, Pissarro painted himself much as he had early in his career: as a simple man who lived his life in complete dedication to his art, his politics, and his ideals. 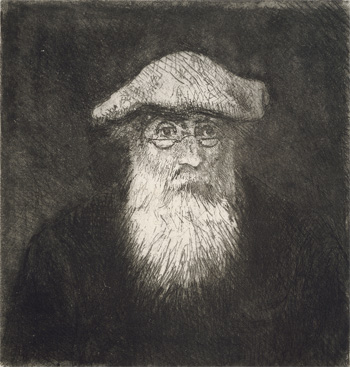 Pissarro worked on this print shortly after he etched an equally somber image of his mother on her deathbed. The artist peers out over the top of half-moon glasses, his face and beard pale against a network of cross-hatched lines and dark areas of shadow, suggesting, perhaps, his mournful state of mind. 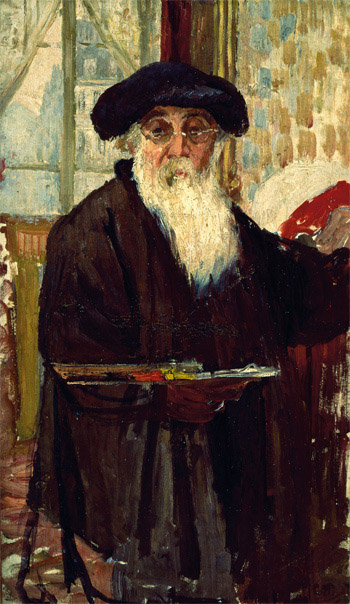 Pissarro was in Paris when anti-Semitic rioting erupted following the publication of Emile Zola’s J’accuse!, which defended Alfred Dreyfus, a Jewish army captain wrongly accused of treason. Because of his ethnically Jewish appearance, Pissarro confined himself to his hotel rooms to escape persecution, painting the only accessible subjects—the view from the window and his own face. It is the only self-portrait in which Pissarro shows himself painting.