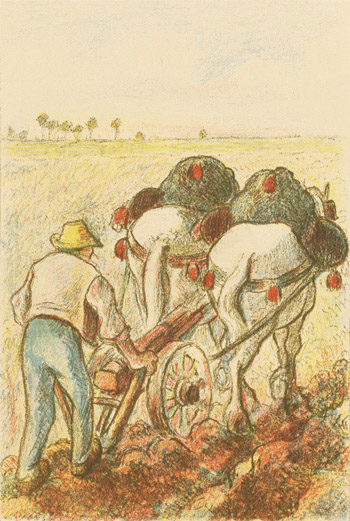 In the mid-nineteenth century, the word anarchy—from the Greek word anarchos, or “having no ruler”—carried few of the connotations of violent lawlessness it would acquire by the 1890s. Anarchism referred instead to a world without hierarchy or rules, without government or private property. Anarchists believed in a future of collective action, wherein equal individuals formed cooperative associations dedicated to mutual aid and common goals. Sustainable agriculture, fair industry, and craft—as well as ample leisure time—were essential elements in this new world order in which work was shouldered by all, and decisions would be made locally by people known to one another.

That such a society could only be realized through the transformation of the existing social, political, and economic systems meant that anarchists also advocated widespread revolution. Not surprisingly, these calls to action were threatening to the various governments that held power in nineteenth-century France. Pissarro himself lived in self-imposed exile with his family for part of the 1890s, when radicalism in all forms was being actively suppressed after the assassination of the French president by an Italian anarchist.

Pissarro was a lifelong anarchist. Attracted to leftist ideas in his youth, he was probably introduced to the writings of Pierre-Joseph Proudhon (1809–1865), the foremost French anarchist philosopher, a few years after his 1855 arrival in Paris. An avid reader, Pissarro formulated his own sophisticated understanding of anarchism from newspapers, essays, and pamphlets, some of which were illegally distributed in France. In fact, as a subscriber and sometime contributor to journals such as La Révolte and Les temps nouveaux, Pissarro appeared on government watch lists of known anarchists, and his letters were intercepted and censored by the police. Many of the leading anarchists known to Pissarro—including Élisée Reclus (1830–1905), Jean Grave (1854–1939), and Peter Kropotkin (1842–1921)—were arrested or banished from the country. Yet despite the real danger of arrest for his political views, Pissarro remained dedicated to anarchist ideals, which shaped how he lived and worked.