Pissarro was the most politically radical and socially progressive of the Impressionist painters. As a child in Saint Thomas, he attended a Moravian school, studying with Afro-Caribbean children in an environment of racial and religious tolerance. In France, as the head of his own growing family, Pissarro treated all members of his household as equals with communal responsibilities. Most importantly, Pissarro was a lifelong reader of revolutionary political and economic theory and a supporter of the anarchist movement in France. He was particularly taken with the writings of the French proto-anarchist Pierre-Joseph Proudhon and of the Russian émigré prince and anarcho-communist Peter Kropotkin, and he counted among his friends the radical theorists Jean Grave and Élisée Reclus. Pissarro’s evolving anarchism was central to his identity as a man and as an artist. 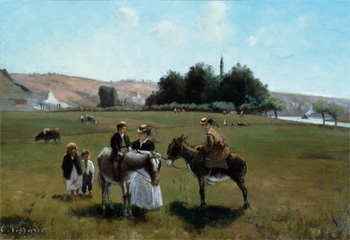 In the mid-1860s Pissarro lived in the village of La Roche-Guyon, where he painted this scene along the River Seine. A bourgeois woman attends to her two well-dressed children as they enjoy a donkey ride while a pair of vagabond children, dressed in rags, look on. The irony—indeed, the tragedy—of such an encounter was as important to Pissarro’s artistic intention as capturing an accurate sense of the French landscape under sunny skies.