Camille Pissarro (1830–1903) has been called the “dean of Impressionism.” His work embodied Impressionism’s radical character more consistently than the paintings of Monet and the other artists associated with the movement.  While he experimented with different styles and techniques, Pissarro remained committed throughout his life to portraying the modern world with a remarkably constant directness and objectivity.

Though he is best known as a landscape painter, Pissarro had a lifelong interest in the human figure. From his earliest years in the Caribbean and Venezuela until his death in Paris in 1903, Pissarro drew, painted, and made prints featuring human subjects from many walks of life. He portrayed his friends and growing family, depicted domestic servants and farm workers, and made genre scenes set in the fields and marketplaces of rural France. Pissarro’s social vision as expressed in his art was tied to his radical political beliefs. As a committed anarchist, he imagined a utopian future society of small communities bound by shared work and social integration. Pissarro’s People explores the painter’s humanism in all its aspects by bringing together his figure paintings, drawings, and prints made over the full course of his career.

Pissarro’s People was curated by Richard R. Brettell, and organized by the Sterling and Francine Clark Art Institute and the Fine Arts Museums of San Francisco. It is supported in part by a grant from the National Endowment for the Arts, and an indemnity from the Federal Council on the Arts and the Humanities. This exhibition would not have been possible without the support of and extraordinary loans from the Pissarro Archive of the Ashmolean Museum, University of Oxford, England. 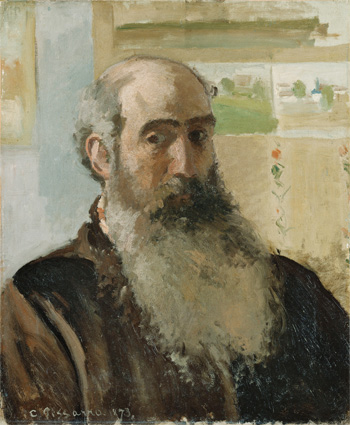 Pissarro painted this self-portrait, his first, while living in a small village northwest of Paris. There, away from the bustle of the city, he pursued a modest life with his growing family, painting among the rural workers. He presents himself as a calm and self-possessed man, already balding at age forty-three, his full beard beginning to gray. The small, unframed landscapes pinned to the wall hint at his profession.