If Pissarro’s early life was largely determined by his New World origins and Jewish background, his first act of independence was his love affair with a Catholic French girl, Julie Vellay, whom he eventually married and with whom he had eight children. The Pissarro household, which included the artist’s mother, Rachel, was crowded if not chaotic. Pissarro was a quintessential family man, yet conformity was anathema to him, and he actively encouraged his children to express themselves as individuals. He taught them to draw, to develop intellectually, and to question the received values of French civilization of the period. Pissarro represented this lively family dynamic, as well as his many friendships, through an ongoing series of portraits and genre scenes. 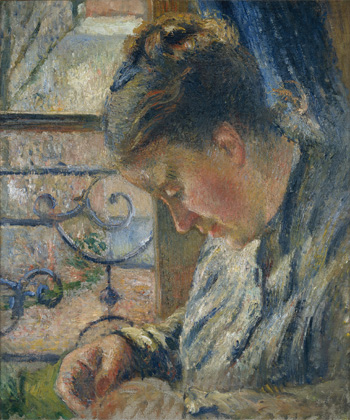 Pissarro depicts his wife, Julie, intent on her sewing and seemingly unaware that she is being painted. The picture is a loving study of domestic tranquility; Julie’s simple profile, full red cheeks, and lack of adornment evoke a modesty somewhat at odds with the swooping curves of the wrought-iron balcony against which she is posed.