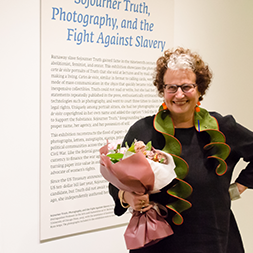 Scholar and writer Darcy Grimaldo Grigsby has been selected to receive the Clark Art Institute’s 2017 Clark Prize for Excellence in Arts Writing. Grigsby is the Richard and Rhoda Goldman Distinguished Professor in the Arts and Humanities at the University of California, Berkeley.

Grigsby, who was born in the Panama Canal Zone, focuses her scholarship on the history of art and material culture in France and the United States from the eighteenth to the early twentieth century, especially in relation to colonialism, slavery, and constructions of race. She writes on painting, sculpture, photography, and engineering, as well as the relationships among reproductive media and new technologies.

Grigsby is the author of three books: Enduring Truths: Sojourner’s Shadows and Substance (University of Chicago Press, September 2015), Colossal: Engineering the Suez Canal, Statue of Liberty, Eiffel Tower, and Panama Canal (Periscope Publishing, 2012), and Extremities: Painting Empire in Post-Revolutionary France (Yale University Press, 2002). She is currently working on a fourth book, Creole: Portraying France’s Foreign Relations in the Nineteenth Century, a collection of essays on the relationship between French art and the Caribbean and Americas (Penn State University Press).

She is the recipient of numerous fellowships and awards, including two Andrew W. Mellon New Directions Fellowships; a grant from the Graham Foundation for Advanced Studies in the Fine Arts; a J. Paul Getty Postdoctoral Fellowship; an Andre Chastel Bourse, INHA (Institut national d'histoire de l’art) fellowship at the Villa Medici, Rome; a residential Senior Fellowship at the Terra Foundation for American Art, Giverny, France; and the Distinguished Teaching Award from the University of California, Berkeley. A Fulbright scholar, Grigsby holds a bachelor of arts degree from the University of California, Berkeley, and master of arts and doctoral degrees from the University of Michigan.