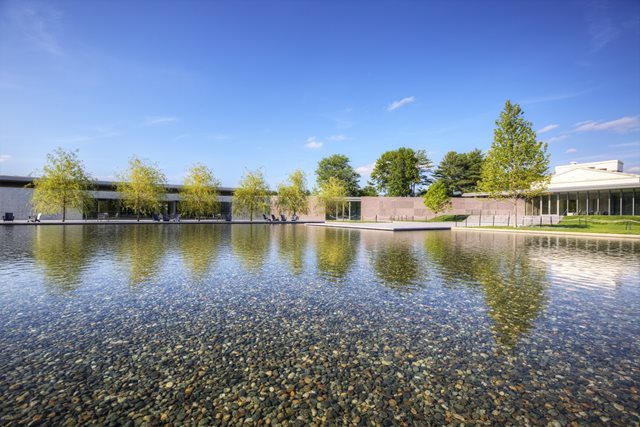 The Clark began as a single white marble museum building designed by architect Daniel Perry; construction began in 1952 and the museum was opened to the public in 1955. In 1973 the red granite Manton Research Center, designed by Pietro Belluschi and The Architects Collaborative to house a library, graduate seminar rooms, galleries, offices, and an auditorium, was completed. A comprehensive master plan for the 140-acre campus was completed by Cooper, Robertson & Partners in 2001. Also in 2001, architect Tadao Ando was invited to plan and design two complementary buildings: Lunder Center at Stone Hill, which opened in 2008, and the Clark Center, which opened in 2014. These additions, combined with a thoughtful remodeling of the existing buildings by Selldorf Architects and a long-term enhancement of the grounds by landscape architecture firm Reed Hilderbrand, enrich the Clark experience for lovers of art and nature, curators, scholars from near and far, students, and local residents alike. Implementation of the master plan was overseen by Gensler, the architect of record.

Opened in 2014, the 42,600-square-foot Clark Center includes more than 7,500 square feet of gallery space for special exhibitions. The building serves as the primary entrance for visitors and houses admissions, dining, and retail spaces. The glass-enclosed Michael Conforti Pavilion is a flexible, multi-use space overlooking a three-tiered water feature and houses exhibitions, conferences, lectures, performances, and events.

The white marble Museum Building opened on May 17, 1955, after a three-year construction period. The building was reconceived as part of the Clark’s master plan and, in 2014, reopened to the public after a short closure. Improvements included the addition of more than 2,200 square feet of new gallery space for a total of 17,700 square feet (43,770 square feet overall), a thoughtful renovation of the existing galleries, and installation of new lighting and environmental controls.