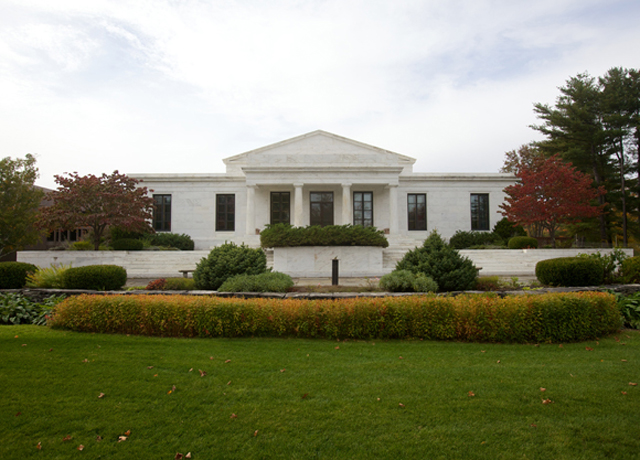 In 1952, construction began on a white marble building to house the Sterling and Francine Clark Art Institute. Sterling Clark chose Daniel Perry as the architect; Clark himself was highly involved in the building's creation, living in a small apartment in the back galleries of the museum when he and Francine arrived for stays in Williamstown. His desire for domestically scaled gallery spaces was manifested in the design, including intimate galleries with large windows providing views of the nearby pond and pastures.

In 1955, the Sterling and Francine Clark Art Institute opened its doors under the guidance of its first director, Peter Guille. Only two galleries were on view and a majority of the collection was not displayed. Over the next few years, the Clark slowly unveiled its treasures in several exhibitions. From the beginning, the Clark received critical acclaim, heralded in the Berkshire Evening Eagle as “a mecca of the art world” and celebrated as a “cultural asset” for Berkshire County and the Williams College community. The Boston Sunday Globe praised its modern innovative lighting and climate control systems. Even with such high praise and expectations, none could have imagined what the Institute would become in the next half-century.

Selldorf Architects' thoughtful renovation of the Museum Building in 2014 included a reconfiguration of the galleries, creation of a sculpture court, and the addition of 2,200 square feet of new gallery space.

Selldorf worked closely with the Clark’s curatorial team on the selection of wall colors and finishes for the reinstalled galleries and designed new cabinets and furniture throughout the building. New environmental systems and lighting were installed bringing the building to state of the art museum standards. In keeping with Sterling Clark’s tastes, windows and skylights still bathe the artwork in natural light and offer visitors pastoral views of the surrounding landscape.