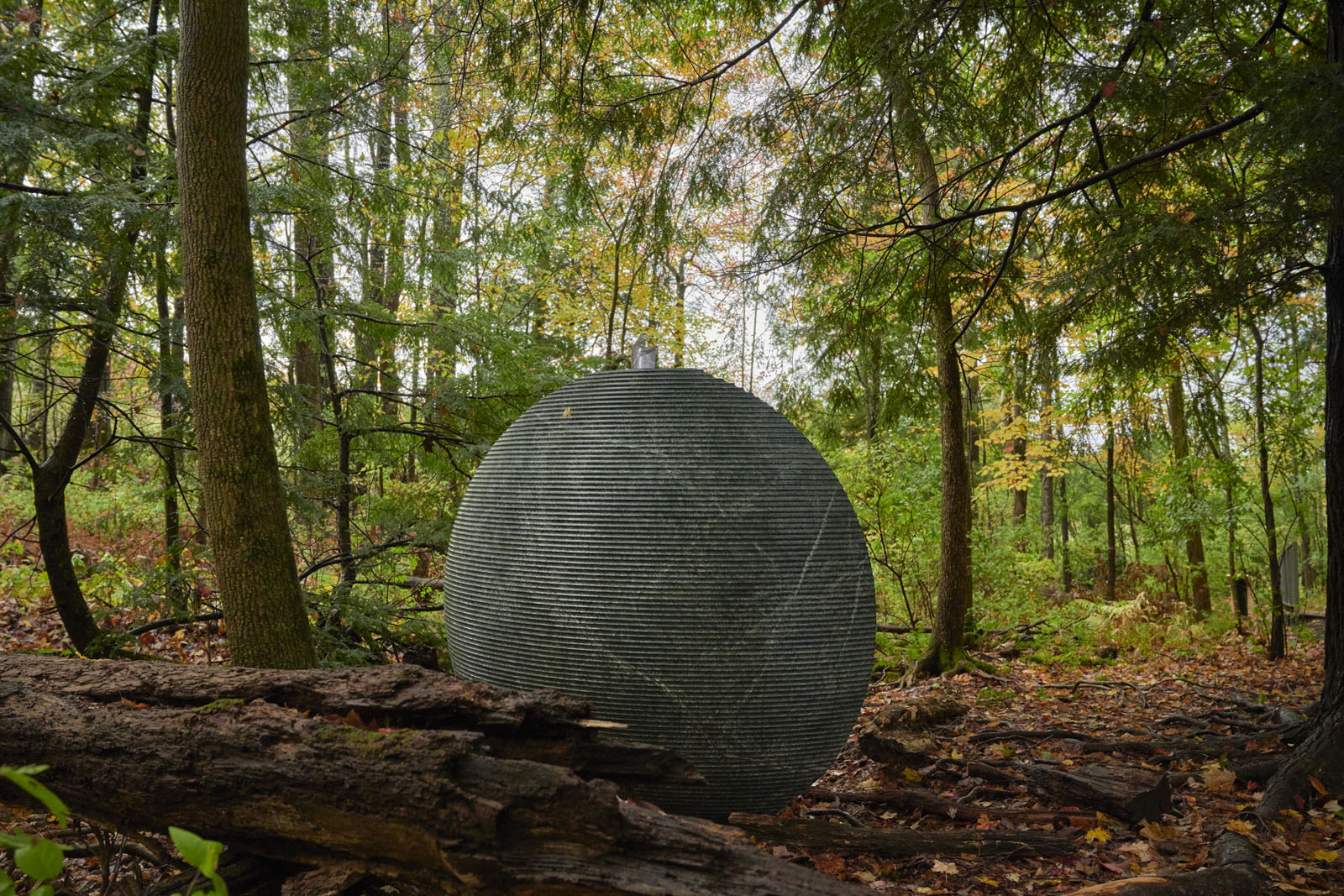 In April 2018 the leaders of North and South Korea met in the Demilitarized Zone (DMZ), a lush and biodiverse area 160 miles long by 2.5 miles wide located between the two countries with no human inhabitants. At one point during this historic meeting, the leaders requested to speak in private, apart from the crowd of journalists who had gathered to report on the event. Despite attempts by members of the press to record their conversation, only birdsong and the click of cameras were audible.

In Haegue Yang’s three-part installation Migratory DMZ Birds on Asymmetric Lens, bird species native to the Korean Demilitarized Zone travel to the unfamiliar setting of New England. Dispersed in the landscape, these three sculptures, in the artist’s words, “scatter the narrative,” encouraging visitors to discover each example in a different environmental context. Part presence, part absence, these portraits of birds create both images and vessels that their local counterparts can perch on and bathe in when rainwater collects. Made of 3-D printed transparent bio-compatible resin set atop robotically milled stone pedestals, these sculptures combine synthetic and natural materials and demonstrate the artist’s interest in new technologies. These hybrid forms collapse the boundaries between history and place, the familiar and the unknown, isolation and separation. In Yang’s assessment, the natural world is ignorant of, and indifferent to, human history. These birds, unburdened by the borders and limitations that our society imposes, are imagined as a kind of avian diaspora settling on Stone Hill among the native inhabitants.

Found throughout Asia, Europe, the Middle East, and Africa, the Great Tit has a strong call and is identifiable by its white cheeks, black head, and yellow belly. The Japanese Bush Warbler, plain in appearance and secretive in behavior, has a rich, varied, and liquid call and is typically found in Japan, China, Korea, the Philippines, and Hawaii. Endemic to Asia and Russia, the Gray-Backed Thrush has a beautiful, melodic song. The bird is often spotted while foraging in the brush, with its bright orange stomach standing out in contrast to its otherwise gray plumage.

Listen to the Artist Talk about this work 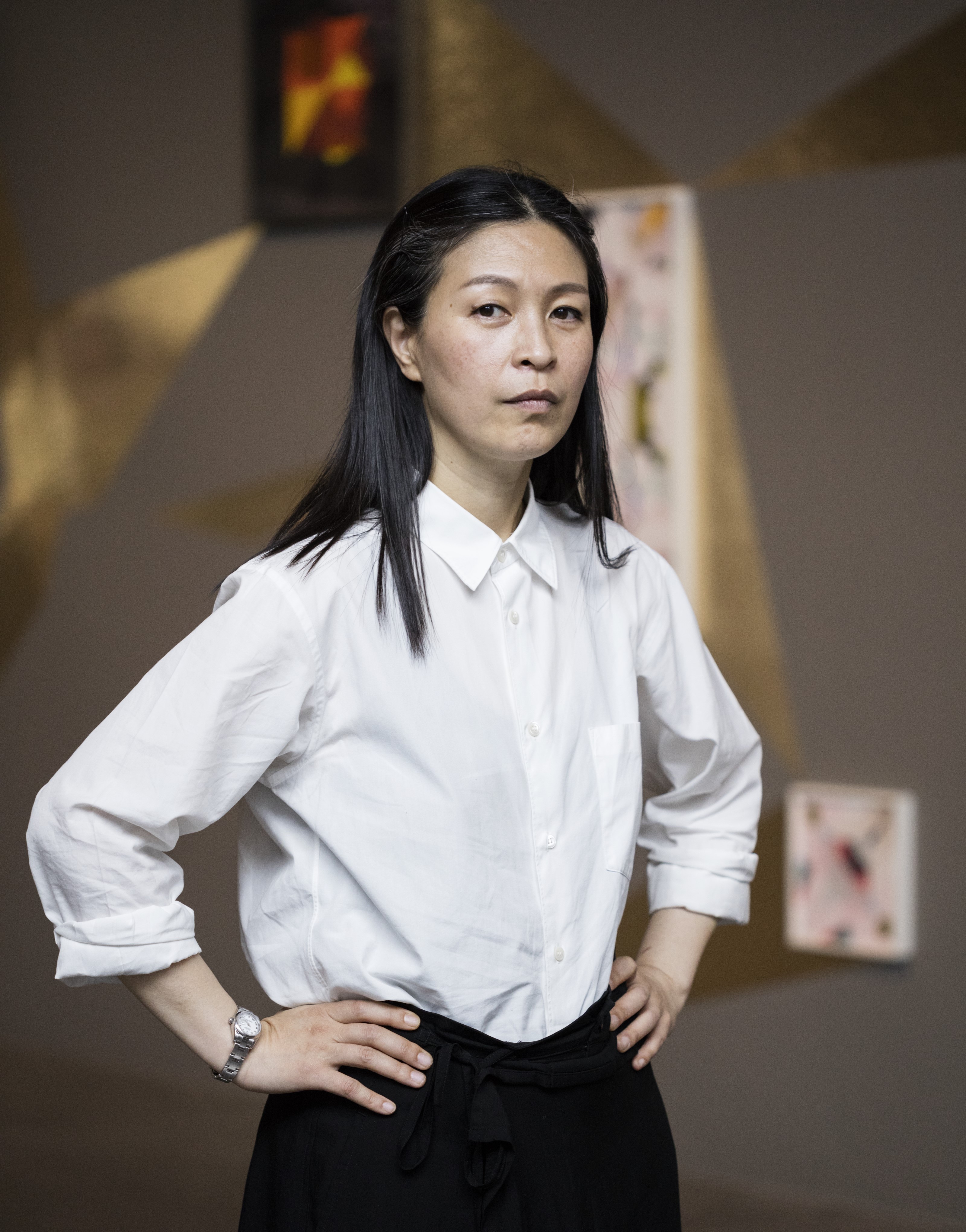 Haegue Yang (b. 1971, Seoul) explores themes of social and political histories in her work, extricating familiar objects and materials from their primary functions and environments and repurposing them in a new framework of abstraction. Yang’s work is held in the collections of The Museum of Modern Art; Tate Modern; the Solomon R. Guggenheim Museum; M+, Hong Kong; National Museum of Modern and Contemporary Art, Seoul; and the Walker Art Center, among others. Recent solo exhibitions include projects at the Bass Museum of Art, Miami Beach (2019); South London Gallery (2019); Museum Ludwig, Cologne (2018); KINDL - Centre for Contemporary Art, Berlin (2018); Centre Pompidou (2016); and the Serralves Museum, Porto, Portugal (2016). A new commission by the artist was recently on view at the Marron Atrium of the renovated Museum of Modern Art, New York. Forthcoming solo projects in 2020 include exhibitions at the Art Gallery of Ontario, MMCA Seoul, MCAD Manila, and Tate St. Ives. Yang lives and works between Berlin and Seoul.