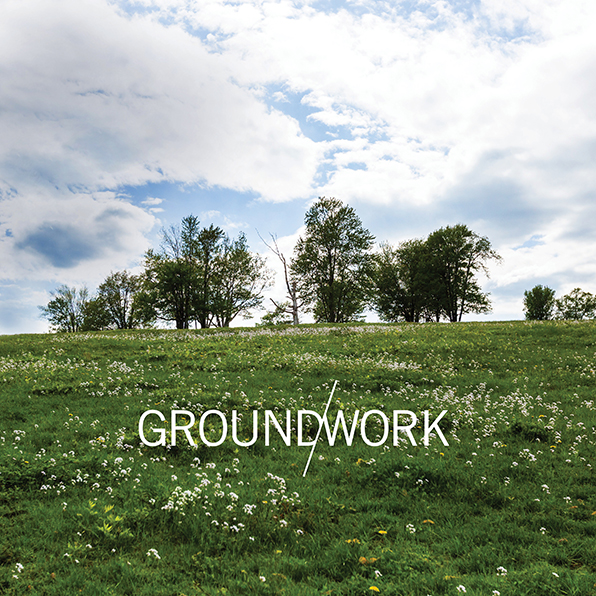 The Clark’s first outdoor exhibition Ground/work consists of site-responsive installations by six contemporary artists presented in locations across the pastoral setting of its 140-acre campus. International artists Kelly Akashi, Nairy Baghramian, Jennie C. Jones, Eva LeWitt, Analia Saban, and Haegue Yang were invited to conceive of a response to the Clark’s landscape and to be in active dialogue with the natural environment and setting.

Collapsing the traditional hierarchy of sculpture in the landscape where the object takes precedence over its site and context, Ground/work instead focuses on nature as subject, participant, and raw material. The projects demonstrate how the experience of space out-of-doors can be shifted and manipulated by forces both solid and ephemeral. The Ground/work artists probe issues of materiality, scale, form, and function, expressing themes and motifs core to their individual practices while exploring new conceptual and physical terrain.

Experienced throughout the four seasons, Ground/work highlights the passage of time, bringing to the fore ideas of chance, transience, and transformation articulated in three dimensions. Offering an intimacy of encounter, the artists each generate new sculptural gestures that engage features of the Clark’s landscape to blur—or to bring into focus—boundaries between the familiar and the unknown.

Open to the public day and night, Ground/work provides unique access to artworks beyond the museum walls. Extending the connections between the ecosystem of Stone Hill, the Clark’s architecture, its revered permanent collection, and contemporary artistic practice, this exhibition expands upon the Clark’s commitment to create a place where visitors can experience remarkable works of art in a setting of profound natural beauty. The works, on view for a year, include new commissions by:


Kelly Akashi (b. 1983, Los Angeles) trained as an analog photographer and brings a documentarian’s instincts and curiosity to a practice that embraces a range of diverse materials and age-old processes. Her work is included in the permanent collections of the Los Angeles Museum of Contemporary Art; the Hammer Museum, Los Angeles; and the Sifang Museum, Nanjing, China, among others. Recent solo exhibitions include presentations at ARCH Athens (2019); François Ghebaly Gallery, Los Angeles (2019 and 2016); and SculptureCenter, New York (2017). During fall 2019, Akashi is an artist in residence at the Headlands Center for the Arts, Sausalito, California, which will culminate in a solo exhibition. Akashi lives and works in Los Angeles. At the Clark, Akashi will install a large-scale lens that reframes the natural surroundings, capturing and revealing the lively and ever-changing environment.

Nairy Baghramian (b. 1971, Isfahan, Iran) grapples with issues of vulnerability and authority as she deconstructs and reassembles the human form, ever mindful of the forces of history, material, and context. Baghramian’s work is held in the permanent collections of the Centre Pompidou, Paris; the Art Institute of Chicago; The Museum of Modern Art, New York; the Solomon R. Guggenheim Museum, New York; the S.M.A.K. Museum of Contemporary Art, Ghent, Belgium; the Stedelijk Museum, Amsterdam; Tate Modern, London; and the Walker Art Center, Minneapolis, among others. Baghramian’s most recent solo presentations include projects at the Palacio de Cristal del Retiro, Madrid (2018); the Walker Art Center, (2017); and the S.M.A.K. Museum of Contemporary Art, (2016). In November 2019, Baghramian participates in PERFORMA 19 in New York, and in 2020 she will have solo exhibitions in Nimes, France, and at the Fondazione Furla, Milan. Baghramian lives and works in Berlin, Germany. For Ground/work, Baghramian will install a marble and stainless steel form that functions both as a portrait of two primary joints of the human body and as a site for their release and renewal.

Jennie C. Jones (b. 1968, Cincinnati) employs strategies of collage and assemblage in her ongoing project of translating sound into physical matter, often reframing history to include black voices. Her work is included in the permanent collections of The Museum of Modern Art; the Solomon R. Guggenheim Museum; and the Hirshhorn Museum and Sculpture Garden, Washington, D.C., among others. In 2020, Jones will have a solo exhibition at The Arts Club of Chicago. Other recent solo presentations include projects at The Philip Johnson Glass House, New Canaan, Connecticut (2018); CAM Houston (2015); the Hirshhorn Museum and Sculpture Garden (2013); The Kitchen, New York (2011); Yerba Buena Center for the Arts, San Francisco (2011); and Atlanta Contemporary Art Center (2009). Jones lives and works in Hudson, New York. At the Clark, Jones works outdoors for the first time. Responding to two Winslow Homer paintings in the permanent collection, Jones acknowledges their point of view and offers an alternative perspective in the form of two sonic replies: one analog, activated by the wind, the other a digital composition experienced within the architecture.

Eva LeWitt (b. 1985, Spoleto, Italy) harnesses forces of color, gravity, suspension, and volume with a sensitivity to space, an interest in repetition and variation, and a reconsideration of materials and their inherent properties. Her work is held in the permanent collections of the Kistefos Museum, Jevnaker, Norway, and M Woods, Beijing, China. LeWitt’s recent solo exhibitions include presentations at The Aldrich Contemporary Art Museum, Ridgefield, Connecticut (2019); The Jewish Museum, New York (2018); and VI, VII Gallery, Oslo, Norway (2018). In 2020, LeWitt will install a site-specific commission at the Institute of Contemporary Art/Boston. LeWitt lives and works in New York. For Ground/work, LeWitt will create her first outdoor sculptural project: a multi-part installation of chromatic totems constructed of layers of resin and film that will reflect and refract the changing light and surrounding landscape throughout the four seasons.

Analia Saban (b. 1980, Buenos Aires) explores the intersections and overlap between traditional media and new technologies, disrupting conventional techniques of drawing, painting, weaving, and sculpture to probe the capacity of an object and the myriad meanings found within its form. Her work is in the collections of the Los Angeles County Museum of Art; the Centre Pompidou; The Israel Museum, Jerusalem; the Hessel Museum of Art at Bard College, Annandale-on-Hudson, New York; Fonds regional d’Art contemporain (FRAC) d’Auvergne, France; Fundación Proa, Buenos Aires; the Hammer Museum and the Museum of Contemporary Art, Los Angeles, among others. The Modern Art Museum of Fort Worth (2019) and the Blaffer Art Museum, Austin, Texas (2016) have both presented solo exhibitions of Saban’s work. Saban lives and works in Los Angeles. At the Clark, Saban will take the existing fence at the base of Stone Hill, which serves as a dividing line between the Institute’s lower campus and the landscape of the hill, and reimagine it as a drawing in space that functions as a primer in strategies of image making.

Haegue Yang (b. 1971, Seoul) explores themes of social and political histories in her work, extricating familiar objects and materials from their primary functions and environments and repurposing them in a new framework of abstraction. Yang’s work is held in the collections of The Museum of Modern Art; Tate Modern; The Solomon R. Guggenheim Museum; M+, Hong Kong; National Museum of Modern and Contemporary Art, Seoul; and the Walker Art Center, among others. Recent solo exhibitions include projects at the South London Gallery (2019); Museum Ludwig, Cologne (2018); KINDL – Centre for Contemporary Art, Berlin (2018); Centre Pompidou (2016); and the Serralves Museum, Porto, Portugal (2016). A new commission by the artist opens this month in the Marron Atrium of the renovated Museum of Modern Art, New York. Yang has forthcoming solo shows at the Bass Museum of Art, Miami Beach; Tate St. Ives, England; and the Art Gallery of Ontario, Toronto. Yang lives and works between Berlin and Seoul. For Ground/work, Yang fragments and renders ambiguous a historical event that took place in her native Korea in April 2018, creating a group of hybrid sculptural forms that articulate—in both positive and negative space—the shape of bird species found in Korea’s demilitarized zone.

Ground/work is guest curated by Molly Epstein and Abigail Ross Goodman. A catalogue, published by the Clark and distributed by Yale University Press, will be released in 2021.