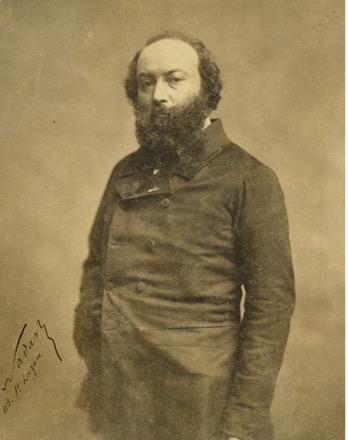 Early in his career, a string of high-profile rejections earned Théodore Rousseau (French, 1812–1867) the nickname “le Grand Refusé.” Rousseau’s fortunes eventually reversed, but the artist never fully abandoned his marginal position. He had an affinity for remote, humble, and neglected landscapes, and spent periods of solitude working in France’s remote provinces. Eventually, Rousseau left Paris to settle with other artists in the village of Barbizon, at the edge of Fontainebleau Forest. There, he became a passionate conservationist, lobbying the French government to preserve tracts of Fontainebleau.

Rousseau, like his friends Charles-François Daubigny and Jean-François Millet, first encountered the cliché-verre process at Barbizon. His output in cliché-verre was limited to two plates, likely owing to his devotion to painting and general lack of enthusiasm for print media.