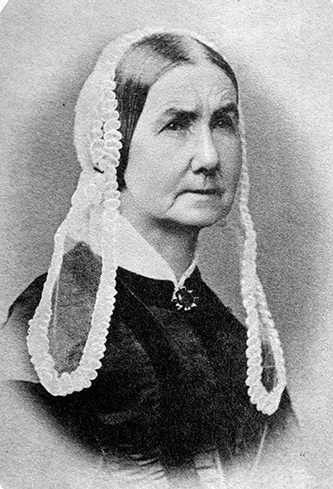 Anna Matilda McNeill was born in 1804 in Wilmington, North Carolina. She married railroad engineer George Washington Whistler, a friend of her brother, in 1831. Mr. Whistler’s first wife had passed away, leaving three children. Anna and George had five more children, although only two survived early childhood, one of whom was James McNeill Whistler.

While Mrs. Whistler initially discouraged her son from becoming an artist, she eventually became one of his strongest supporters. In 1863, she moved from Richmond, Virginia, to live with him in London. There, in his studio at 2 Lindsey Row in Chelsea, his mother sat for the portrait in 1871. Whistler had intended to paint her standing but continued with her seated when she grew tired. Although he later referred to the work as a portrait of his mother, Whistler originally titled the painting Arrangement in Grey and Black to emphasize its aesthetic qualities rather than its subject matter. The painting received mixed reviews when it was first exhibited at the Royal Academy in 1872, with many critics puzzled by its unconventional pose, spare composition, and nearly monochromatic palette.

Whistler initially claimed he would never part with the painting, but when his financial circumstances became unstable he used the work as collateral with creditors. Mrs. Whistler died in 1881, and later, when Whistler’s fiscal troubles worsened, the artist decided to sell the painting. It was bought by the French state in 1891 for the Musée du Luxembourg in Paris and later became the first American painting to enter the collection of the Louvre; it was transferred to the Musée d’Orsay in 1986.