Tauba Auerbach: About the work 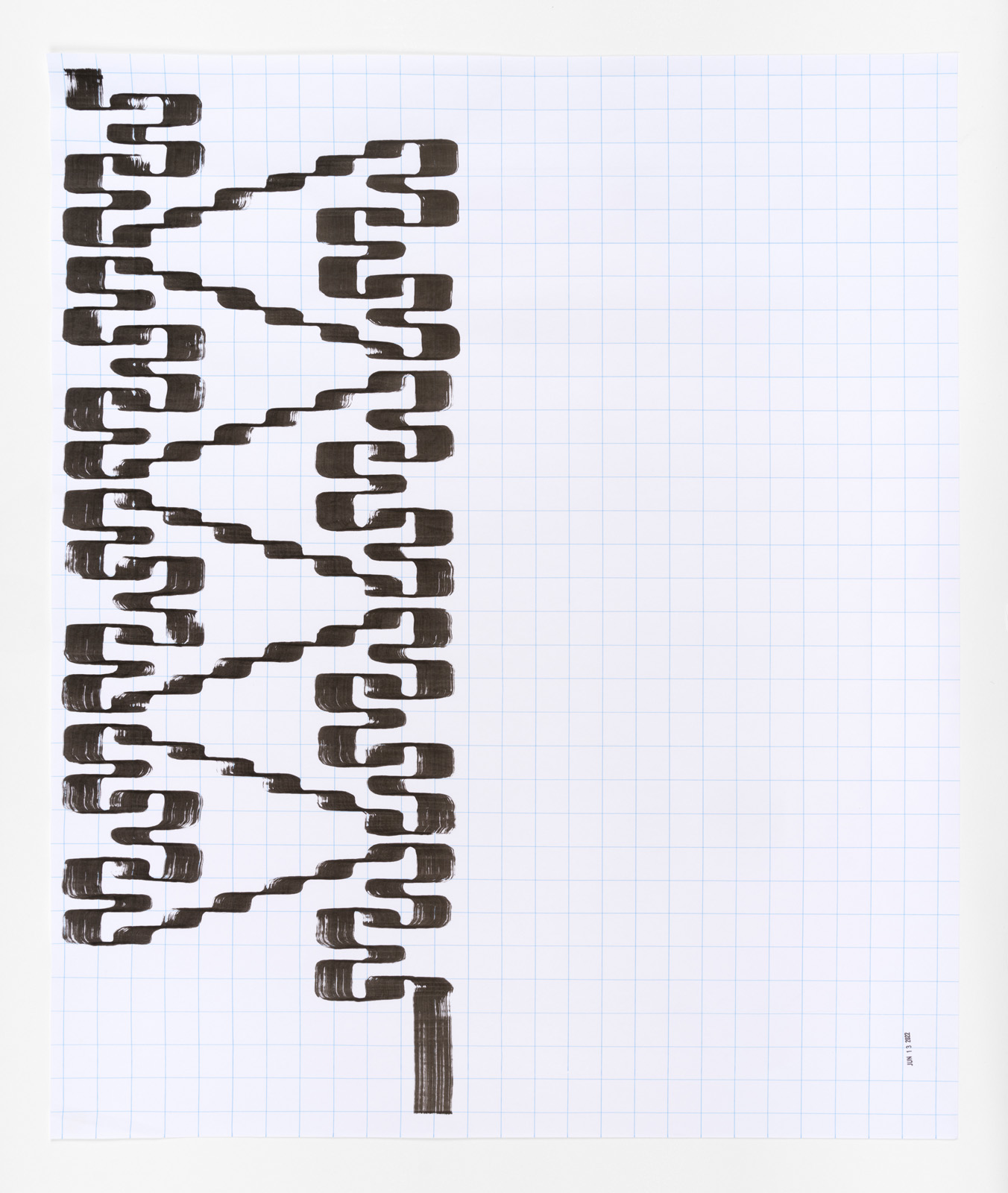 Tauba Auerbach’s approach to the meander here is at once analytical, intuitive, and gestural. The LIGATURE DRAWINGS are a kind of automatic writing stripped of linguistic meaning; the curves themselves are the content. Each drawing is made using a chisel-tip marker or brush-tip pen, in one sitting, and the date is stamped on the paper. With repetitive, calligraphic strokes and a focus on the mechanics of the body, the artist attempts to feel their way into the forms. Auerbach first honed this state of flow while working as a sign painter, a craft that requires a balance of precision and speed. The series title suggests the artist’s entwined interests: A ligature is the line that connects letters in handwriting and notes in musical notation; in surgery, it is a thread that ties tissue. 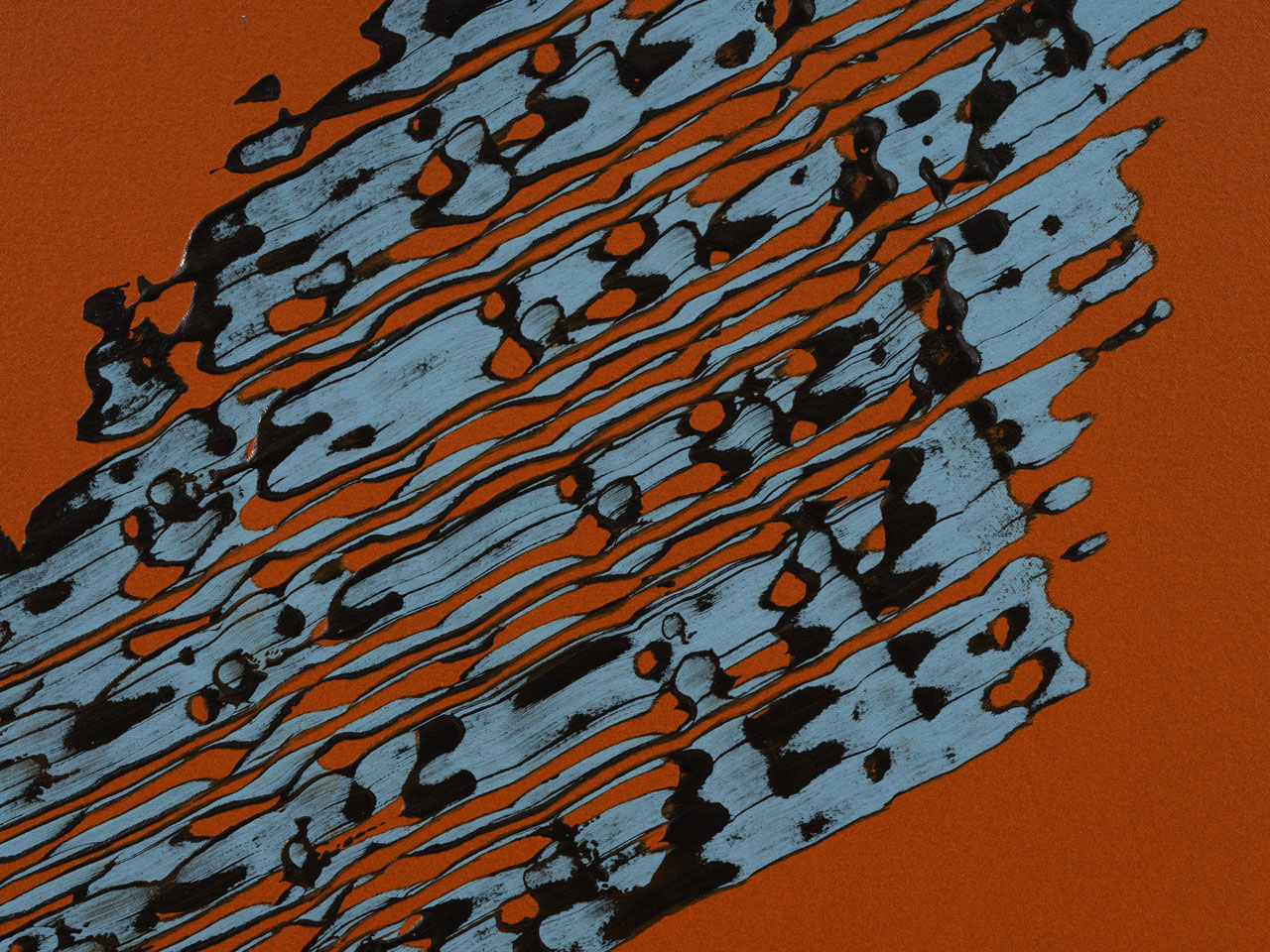 To make these paintings, Auerbach grazes still-wet layers of paint on the canvas with cylindrical tools bearing different mathematical curves. The GRAIN paintings register the direction, force, and speed of the artist’s movements. And while the curves Auerbach employs are precise, fixed, and flat, they appear here as painterly, dynamic, and even dimensional — transformed, sometimes beyond recognition, into quivering, seemingly emergent forms. 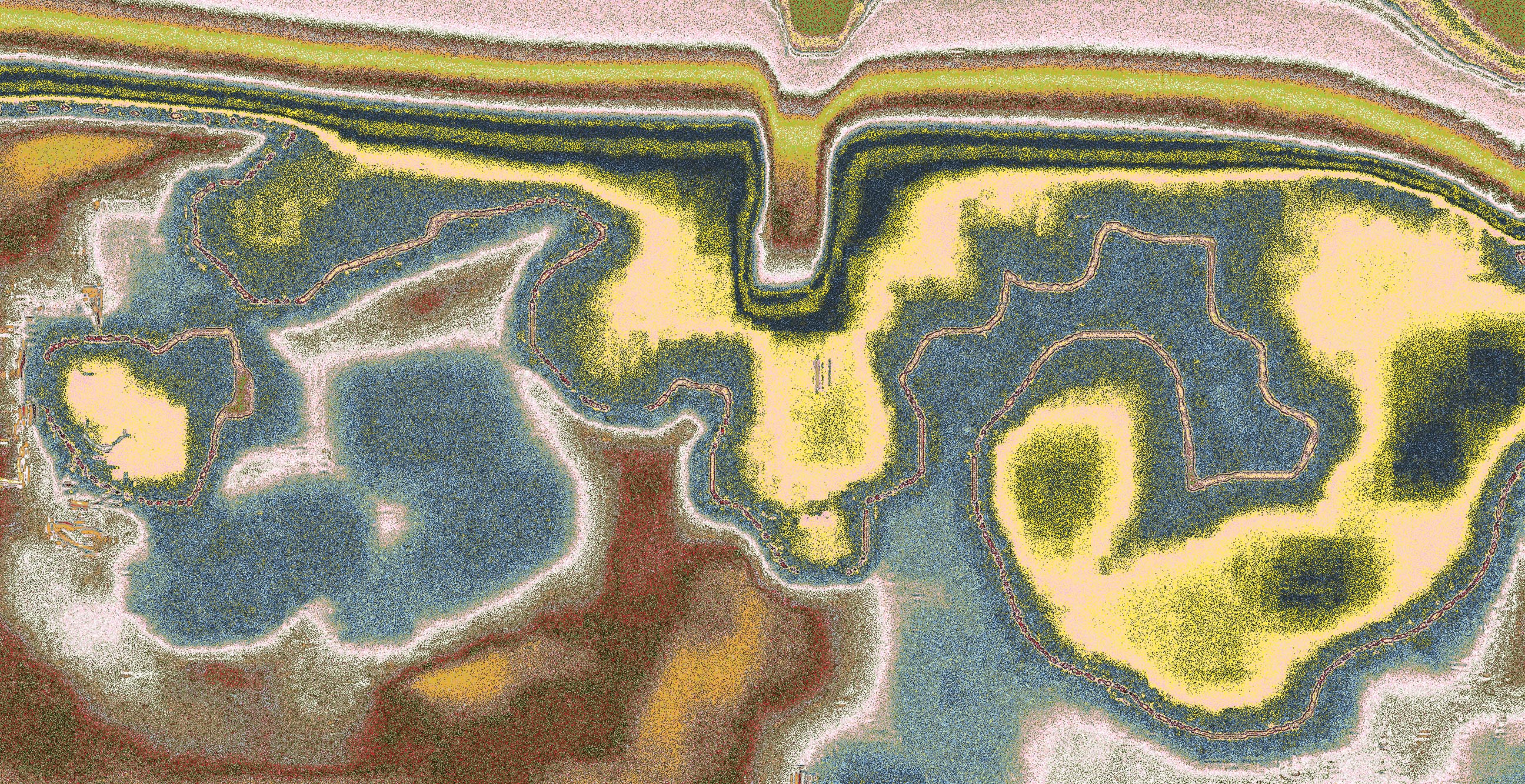 The ancient ornamental motif of the meander is tied in many cultures to water — whether the serpentine path of a river or the ceaseless churning of waves. Auerbach’s HEAT CURRENT prints visualize the interface between water currents of different temperatures or, as the artist puts it, “the shape of a distinction.” Yet what looks like satellite imagery of an ocean is in fact produced in a bathtub, with the help of pumps, hoses, and strategically placed obstacles. Auerbach uses an infrared camera extension to represent these oscillating flows, then manipulates the image using software. Here, fluid dynamics that would normally be invisible to us are given a form whose logic we might recognize at other scales. 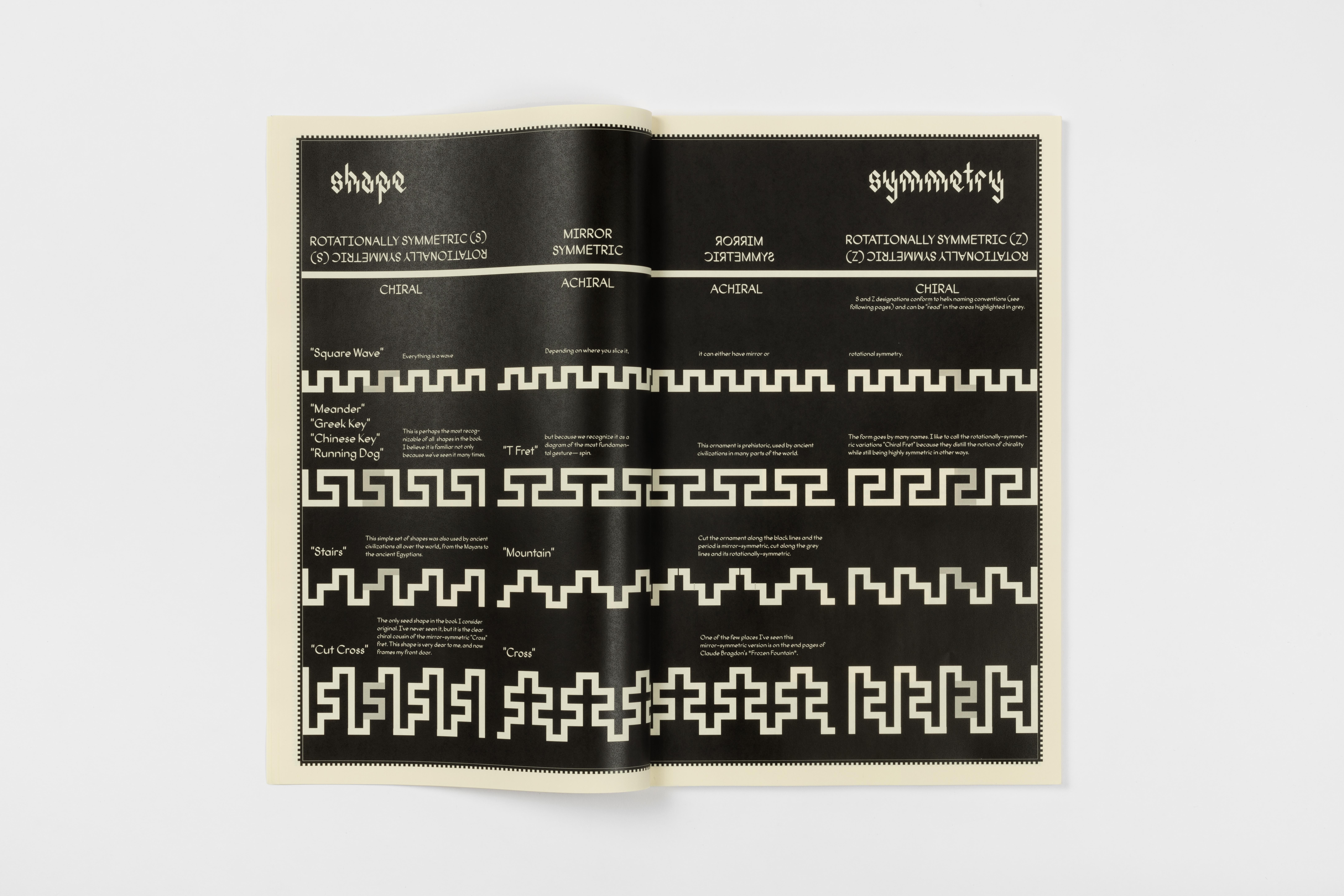 A Partial Taxonomy of Periodic Linear Ornament
2017, with ongoing revisions
17 x 11 x 1/2 in.
Laser print on paper, Bristol board

This artist’s book represents Auerbach’s research into, and personal reflections on, indirect lines that repeat at intervals—also known as waves, frets, keys, and meanders. Some of the ones included here are well known as decorative forms or mathematical operations, while others are of Auerbach’s own invention. Through their publishing imprint Diagonal Press (est. 2013), Auerbach is responsible for this book’s form, content, and production; the writing, layout, and even typefaces are the artist’s own. Diagonal Press publishes handmade books, banners, ornaments, and other objects in open, unlimited editions that are unsigned, unnumbered, and perpetually undergoing revision. 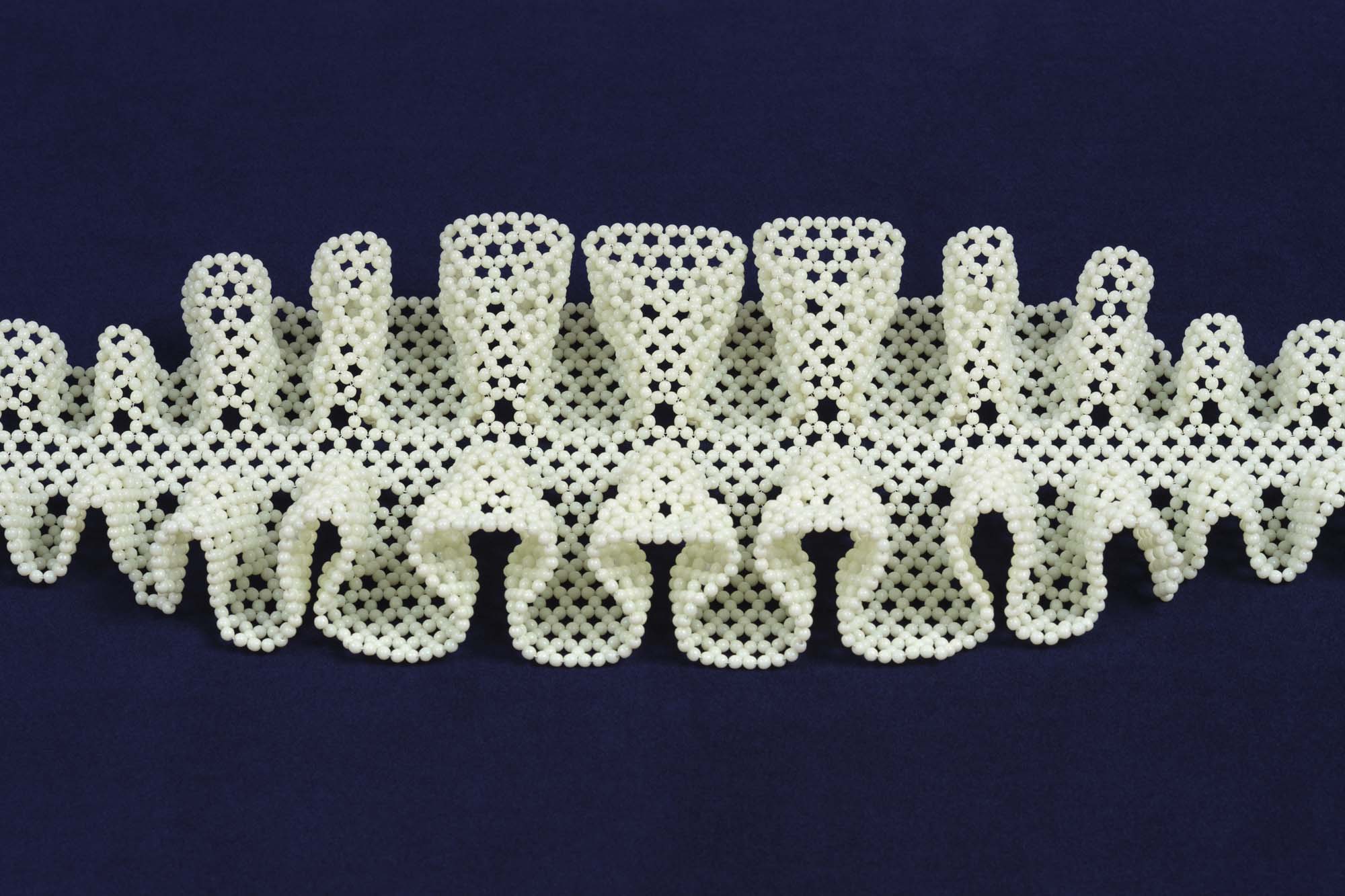 These sculptures connect thousands of Czech glass beads using a figure eight handweaving stitch Auerbach learned from a chemist in Taiwan, who uses it to make three-dimensional molecular models. These sculptures are fractal, in that they are organized in the same way at multiple scales. They are based on a simple algorithm that, nevertheless, creates increasingly unruly surfaces over time. Auerbach is fascinated by things that can be defined neatly in theory but are less orderly in their natural manifestations. 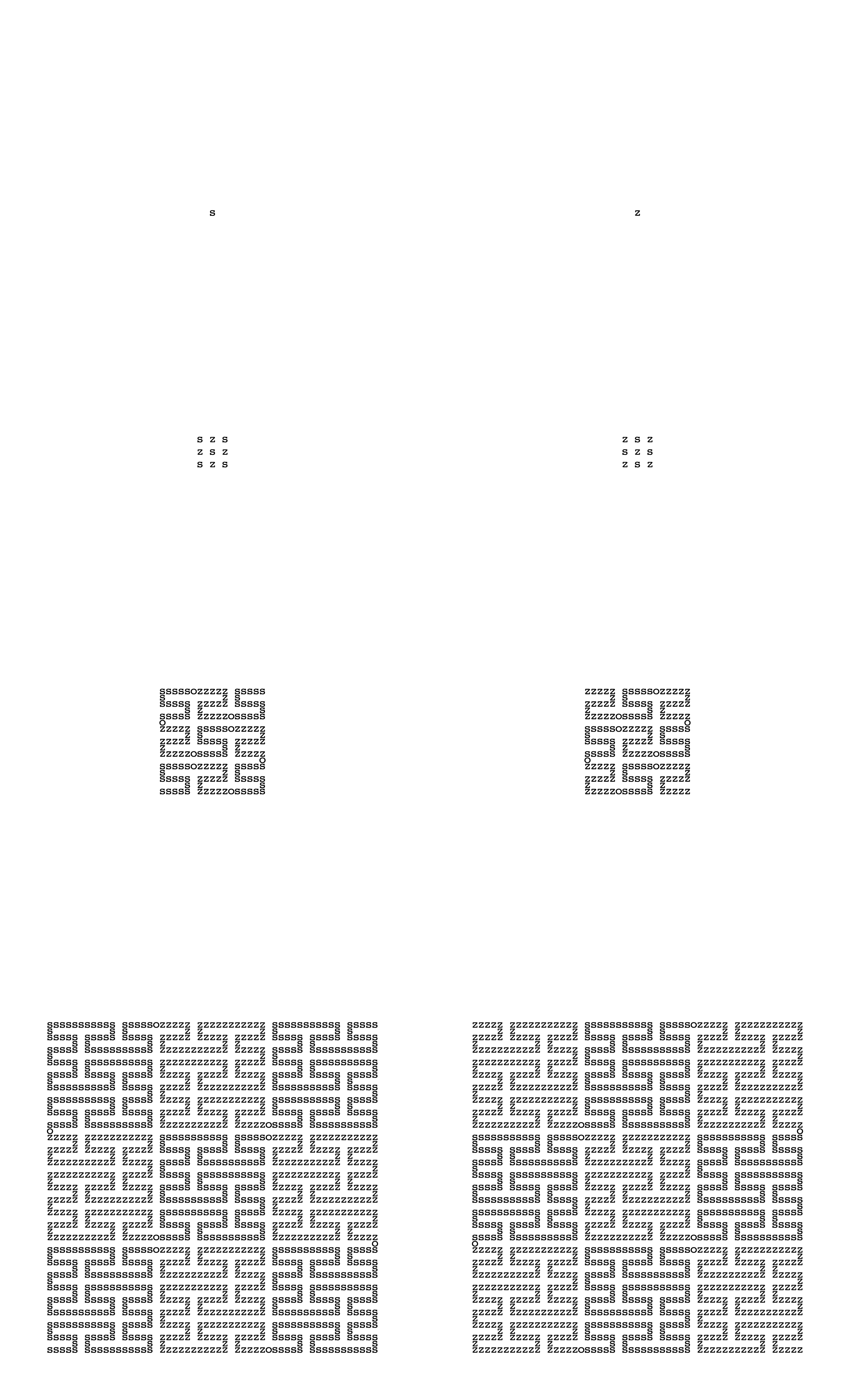 The Peano curve is named for Italian mathematician Giuseppe Peano (1858 – 1932). It describes a “space-filling curve,” or a line that, if folded infinitely in a particular fashion, passes through every point of a square (see image below). Auerbach here creates progressive iterations of that curve using the letters S and Z, a convention the artist often uses to symbolize opposite directions of rotation. Each cluster of nine letters is expanded in the grouping below, in which S’s and Z’s form larger versions of themselves, creating a symmetry across scales that could continue indefinitely (and is mirrored across the fold of the page). Auerbach’s abstracted poem nods to early twentieth-century concrete poetry, in which the arrangement of linguistic elements conveys meaning, but is distinctive for its mathematical rigor. PEANOPOEM I is published on the occasion of this exhibition by Auerbach’s Diagonal Press.