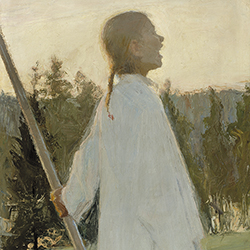 This exhibition showcases the remarkable artistic production of women artists working in Paris during the latter half of the nineteenth century. Paris was the epicenter of the art world during this period, and while it was a cosmopolitan city, it remained strikingly conservative, particularly with respect to gender. Nevertheless, many women chose to work and study there. Women Artists in Paris reveals the breadth and strength of their achievements and features paintings created by women of varied nationalities and fame. These artists range from the well-known—Berthe Morisot, Mary Cassatt, and Rosa Bonheur—to those less recognizable to US audiences, such as Kitty Kielland, Louise Breslau, and Anna Ancher.
Women Artists in Paris, 1850–1900 is organized by the American Federation of Arts. Guest curator Laurence Madeline, Chief Curator for French National Heritage, was aided by Suzanne Ramljak, AFA Curator, and Jeremiah William McCarthy, AFA Associate Curator. Presentation of the exhibition at the Clark is coordinated by Esther Bell, Robert and Martha Berman Lipp Senior Curator at the Clark.

The exhibition is generously supported by the National Endowment for the Arts and by an indemnity from the Federal Council on the Arts and the Humanities. Additional funding is provided by the JFM Foundation, Elizabeth K. Belfer, the Florence Gould Foundation, Monique Schoen Warshaw, the Barbro Osher Pro Suecia Foundation, the Swiss Arts Council Pro Helvetia, Clare McKeon, Steph and Jody La Nasa, Victoria Ershova Triplett, the American-Scandinavian Foundation, and the Finlandia Foundation.  Support for the accompanying publication provided by Furthermore: a program of the J.M. Kaplan Fund.

Presentation of Women Artists in Paris at the Clark is made possible by the generous contribution of Denise Littlefield Sobel, with additional support from the Dr. Lee MacCormick Edwards Charitable Foundation.