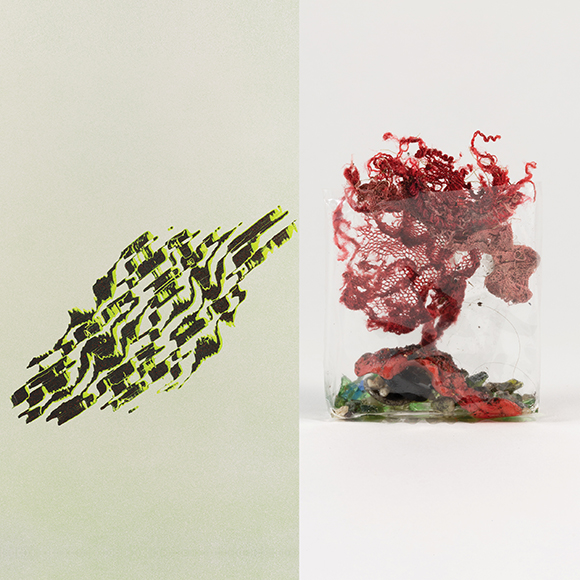 This exhibition pairs new work by Tauba Auerbach and Yuji Agematsu, across parallel galleries in the Lunder Center at Stone Hill, under the rubric of the meander, as both noun and verb, motif and method. For Auerbach (b. 1981, San Francisco; lives and works in New York), this twisting, self-avoiding line traces global traditions of ornament as much as physical waveforms and space-filling curves in geometry. The artist’s restless experimentation in a range of media produces work that is as rigorous as it is visually arresting: calligraphic drawing, infrared imaging, and large-format painting are all part of Auerbach’s complex and expanding universe.

For Agematsu (b. 1956, Kanagawa, Japan, lives and works in New York) and his practice of walking, collecting, and archiving, meander implies drift—both his own paths through New York City and those of other people and things. Agematsu’s handheld sculptures are like small worlds. The flotsam he finds—a foil wrapper, spent fireworks, a fishbone—interests him both aesthetically and anthropologically. Each object marks the time of the artist’s daily ritual, the space of the city, and its movement of people and things.

In plainly different ways, both artists sharpen our perception of the flows of matter and energy around us—between intuition and analysis, difference and repetition, the quotidian and the cosmic. The exhibition publication, a special issue of the journal Serving Library Annual, is themed on the meander more broadly, considering it in literary, mathematical, neurological, and technological terms, among others.

This exhibition is organized by the Clark Art Institute and curated by Robert Wiesenberger, associate curator of contemporary projects.

Major funding for this exhibition is provided by Agnes Gund and Katherine and Frank Martucci, with additional support from Thomas and Lily Beischer and Margaret and Richard Kronenberg.