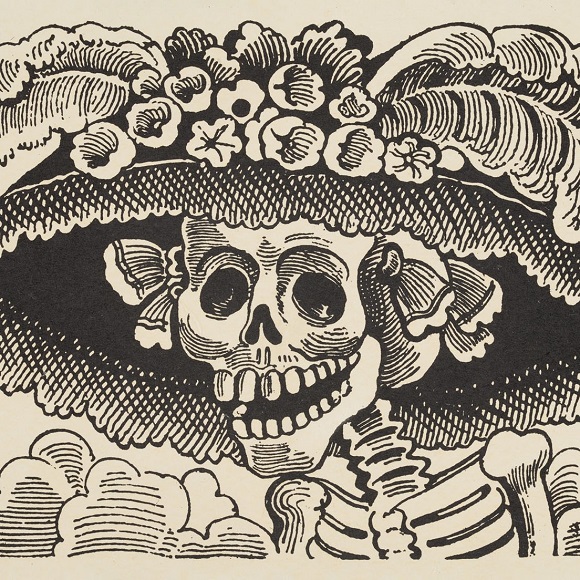 José Guadalupe Posada (1852–1913) was recognized already in 1888 as “the foremost caricaturist, the foremost graphic artist” of his native Mexico. A tireless producer of caricatures and satirical imagery for the penny press, Posada built his career in an era of political repression and lived to see the profound social changes brought by the Mexican Revolution of 1910. His pictorial contributions to broadsides, or ephemeral news sheets, provided a daily diet of information and entertainment to a public for whom images needed to tell the story since literacy was not widely prevalent at that time.  Posada’s highly varied images of noticias—lurid crimes, current scandals, and other sensational stories—constitute only a part of his extensive output. Reused and reprinted, sometimes until they wore out, his beloved illustrations also encompass religious subjects, ballads, and children’s books and games. Posada is best known for his sheets of calaveras (skeletons), which figured in popular rituals around the Day of the Dead but were also adapted into satires of political figures and other individuals. Whether playful or trenchant, vernacular or surreal, Posada’s imagery continues to delight. This exhibition, drawn from the extensive collection of Posada’s works at the Amon Carter Museum of American Art in Fort Worth, Texas, showcases the vibrant visual culture of Mexico in the years before its 1910 Revolution.

This exhibition is organized by the Clark Art Institute and curated by Anne Leonard, Manton Curator of Prints, Drawings, and Photographs.