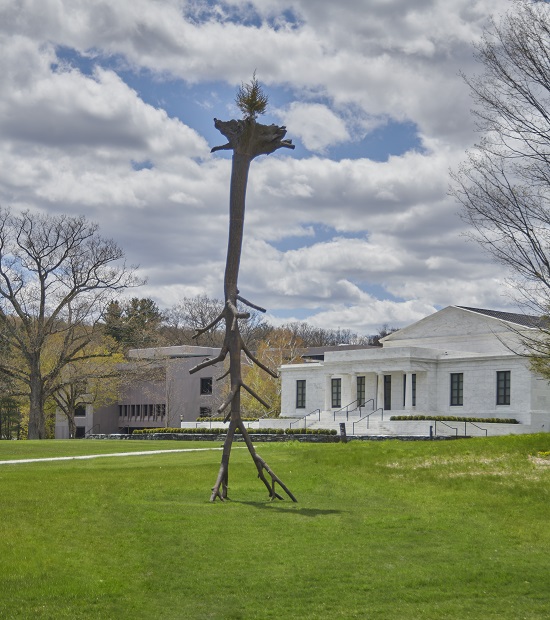 Le foglie delle radici (The Leaves of the Roots)

The Clark hosts the first American installation of Le foglie delle radici (The Leaves of the Roots) (2011) by sculptor Giuseppe Penone (b. 1947, Garessio, Italy). The thirty-foot-tall sculpture of an upturned tree made of cast bronze, steel, and soil with a live eastern red cedar sapling growing atop its inverted roots greets visitors on the front lawn of the Clark’s 1955 Museum Building.

Penone uses objects from the natural world to explore the interconnected relationship between humans and nature. In the late 1960s, he was a proponent of the Arte Povera movement, which used “poor” and unconventional art materials such as soil and plant matter to challenge the commercial values of the art market and critique Italy’s rapid industrialization. Penone’s ongoing engagement with trees reflects his fascination with growth, gravity, and the boundaries between artistic and natural intervention.

In Le foglie delle radici, Penone’s combination of cast and living forms creates a double-image of a tree that invites us to view the similarities between natural and artistic processes with fresh eyes. The artist compares the lost-wax process of bronze casting that created the upturned trunk to the natural ability of a tree to nourish itself by pulling water up from the earth. In traditional lost-wax casting, hollowed branches are used as channels through which the molten bronze travels into a mold. The flow of bronze through the branches of a mold mimics the flow of water from a tree’s roots into its branches. Here, Penone has suspended this site of new growth above the ground where a living sapling thrusts its own roots into the soil-filled roots of the bronze sculpture.