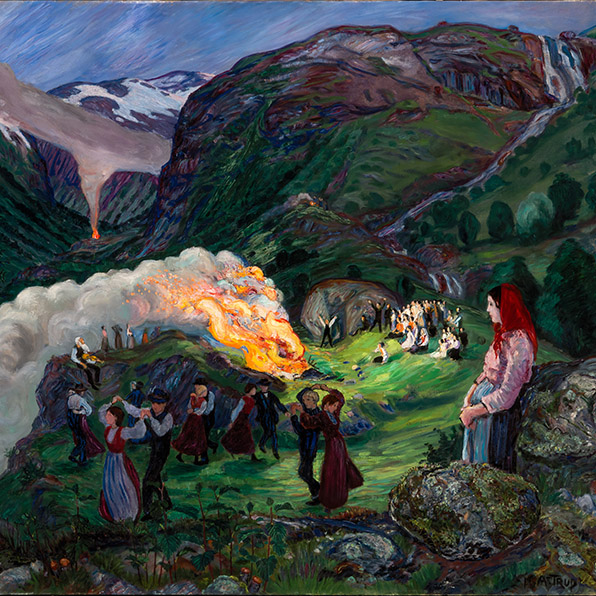 The Clark presents the first North American exhibition of the paintings and prints of Norwegian painter Nikolai Astrup (1880–1928), who deftly wove tradition and innovation into his artistic production. Astrup is considered one of Norway’s most important artists, yet he is largely unknown outside of his homeland. Nikolai Astrup: Visions of Norway features more than eighty-five works celebrating this brilliant painter, printmaker, and horticulturalist.

Astrup’s oeuvre is notable for its intense, colorful palette, and the magical realism of his remarkable landscapes. Paintings and woodcuts from all periods of his career are presented in the exhibition, including multiple impressions of print compositions that reveal how Astrup modified the mood and meaning of these works through changes in color and the addition or deletion of motifs, often using multiple blocks to create his complex prints.

After training in Kristiania (Oslo) and Paris, Astrup returned to his childhood home and pursued his career in the remote region of western Norway overlooking Lake Jølster. Eventually, he settled on a property called Sandalstrand, situated across the lake from where he was raised. There he created a farmstead that served as a source of inspiration for his artistic purposes, sustained his family, and proved an early manifestation of ecological conservation.

The area’s sublime landscape, distinctive atmosphere, and ethereal summer light captivated Astrup, while his childhood memories—marked by local traditions and Norwegian folklore—deeply shaped his perception of place. Astrup’s work responded to, and helped shape, Norway’s emerging national identity. He created a distinctive visual language that expands on the intentions and achievements of composer Edvard Grieg (1843–1907) and playwright Henrik Ibsen (1828–1906) in Norwegian music and literature, respectively.

Guest curated by independent scholar MaryAnne Stevens, former Director of Academic Affairs at the Royal Academy, London, Nikolai Astrup: Visions of Norway is presented in the Clark’s special exhibition galleries and accompanied by a catalogue published by the Clark and distributed by Yale University Press. The exhibition travels to the KODE Art Museums, Bergen, Norway, from October 15, 2021–January 23, 2022 and to the Prins Eugens Waldemarsudde, Stockholm, from February 19–May 28, 2022.