A Change in the Light

The Cliché-verre in Nineteenth-Century France 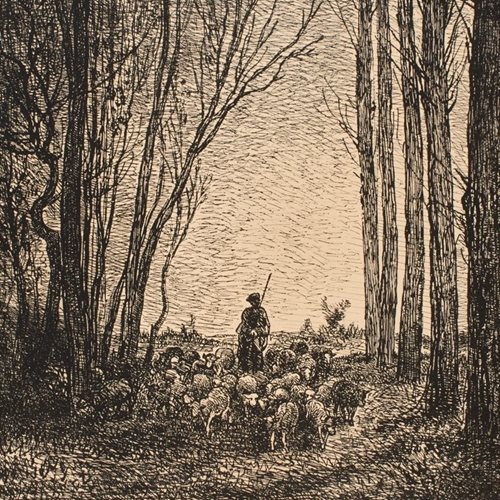 Cliché-verre, a hybrid process developed in the mid-nineteenth century, combined the techniques of the graphic arts—namely drawing and printmaking—with those of the new medium of photography. To make a cliché-verre, an artist either coated a transparent glass plate with an opaque ground and incised a drawing into it—a process similar to preparing a metal plate for etching—or painted directly onto the plate. The transparent design was then placed in contact with a sheet of light-sensitive paper and exposed to sunlight to create a print. Like a photographic negative, a cliché-verre plate could be reprinted to produce multiple copies of a single image.

In 1853, a version of the cliché-verre process was devised by an amateur photographer and a drawing instructor working in the French town of Arras. The two men promoted their invention to France’s leading artists as a direct and portable way of reproducing their drawings in multiples. More efficient methods of image reproduction replaced the cliché-verre before it ever achieved widespread popularity, but during the two decades when it was in use, the process offered France’s artists a unique visual vocabulary of atmospheric blur, luminous tone, and vibratory mark-making. In more ways than one, the hybrid technique—located between traditional printmaking and novel photography—combined established convention with modern innovation. The clichés-verre of nineteenth-century France display daring formal and stylistic experimentation. They also thread history and myth through a social, political, and ecological landscape that was rapidly remaking itself.

This exhibition presents clichés-verre by five French artists—Jean Baptiste Camille Corot, Charles-François Daubigny, Eugène Delacroix, Jean François Millet, and Théodore Rousseau. The works are drawn from a historic portfolio recently acquired by the Clark. Printed in 1921 from a set of original cliché-verre plates, the Clark’s portfolio is one of a special edition of just five that includes two variant printings of each plate. In addition to displaying a single complete set of plates, the exhibition will feature a number of pairings of variant prints to demonstrate the range of expressive potential in printing a cliché-verre.

Support for this exhibition is provided by the Troob Family Foundation.