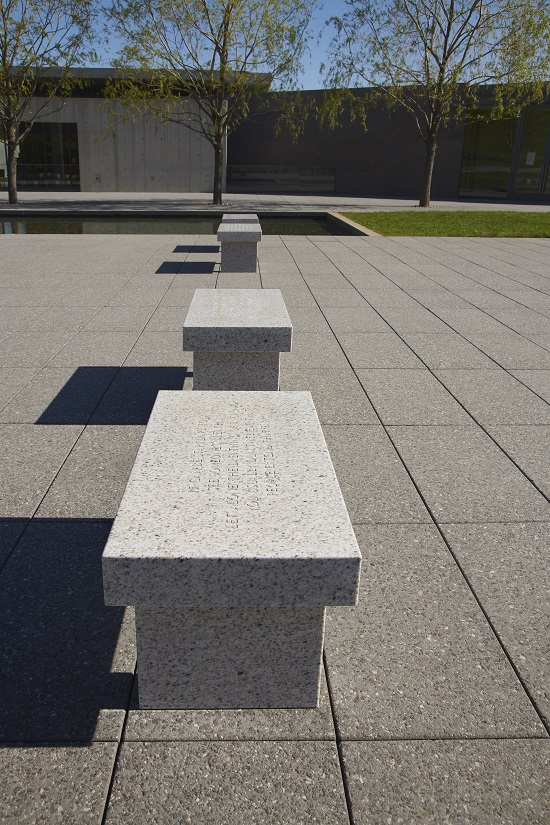 Four benches from the Living series

Jenny Holzer began writing, compiling, and self-publishing pithy statements in 1977. Early in her career, she wheat-pasted posters of them around New York, but soon moved on to displaying her texts on electronic signs, websites, billboards, t-shirts, projections, bronze plaques, condoms, hats, and carved stone benches, like those exhibited here at The Clark. The five works installed on the Fernandez Terrace present selections from two different series of writings: Truisms (1978-1983) and Living (1980-1982).

Truisms comprises hundreds of one-liners, arranged alphabetically. Together they form a conflicting database of assertions that are concurrently morose, inspiring, incendiary, comforting, conservative, radical, but above all provocative. The texts that make up Living are slightly longer, like single stanza prose poems, and describe unsettling moments in human experience.

The marble bench closest to the Museum Building is inscribed on five sides with selections from Truisms. The four smaller granite benches nearest to the reflecting pool each present one selection from Living. Created with the help of a stone-carver who makes memorials, the simple and cool benches conjure the feeling of a grave or a monument, and Holzer’s text lands with the gravity of a tombstone. Yet these compact monuments do not commemorate the dead, nor the generous gift of a donor, as one might expect of a museum bench. Instead, the stone benches make permanent Truisms’ cacophony of aphorisms and Living’s deadpan unease.