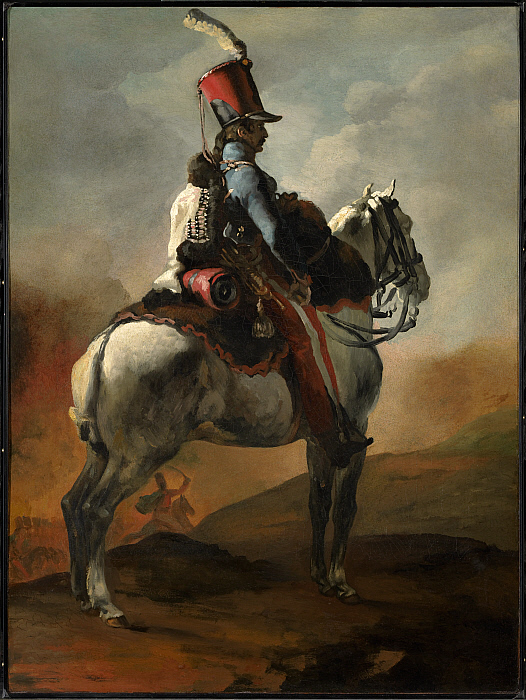 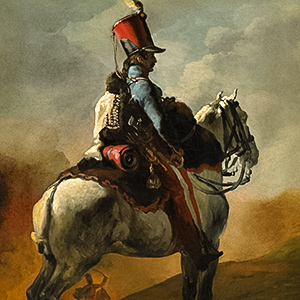 Trumpeter of the Hussars

This figure’s uniform identifies him as a member of the hussars—notoriously fearless cavalry—in the French army. He sits astride his horse, at a distance from the raging battle, with his trumpet at his side. Trumpeters needed visibility to sound a charge or retreat, yet his isolation may also symbolize the widespread disillusionment with the French military after the fall of Napoleon in 1815.

1. In a written addition found in a copy of the sale catalogue (British Museum, London), there is a work titled Hussard à cheval (Mounted Hussar), listed under the heading “études peintes par Géricault,” that may correspond to this painting. The annotated catalogue is reprinted in Germain Bazin, Théodore Géricault: Étude crtitique, documents et catalogue raisonné, 1987–97, vol. 1, p. 96, and the sale is Lugt 10747.
2. The sale catalogue notes that “in the background combatants are seen. A painting of beautiful color and a great energy of execution” (“Dans le fond on aperçoit des combattans. Tableau d’une belle couleur et d’une grande énergie d’exécution”) and the dimensions are given as 36 x 26 pouces (approximately 97 x 70 cm); this description may correspond to the present painting after it was enlarged.
3. In his diaries, Sterling Clark later recalled that this painting was bought in partial exchange for Gérôme’s Snake Charmer (1955.51), commenting in 1944, “[M]y mother had turned [Snake Charmer] in to Schaus for $10,000 to $12,000 around 1899 as part payment for the ‘Trompette de Hussards’ at $35,000” (RSC Diary, 11 Nov. 1944). She could not have acquired Trumpeter of the Hussars in 1899, however, since it was owned by Lutz until 1902.)

Antiope Ravished by Jupiter in the Form of a Satyr 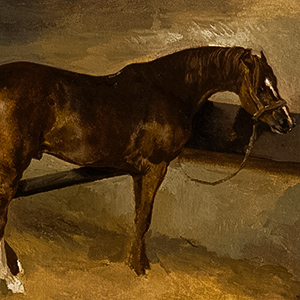 Dervish in His Stall 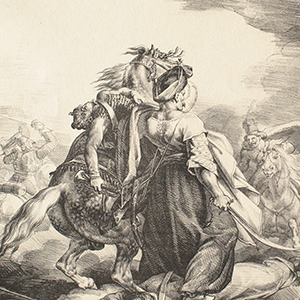 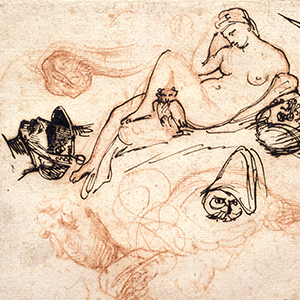 Sheet of Studies with Michelangelo's "Night," a Grenadier, and Other Sketches 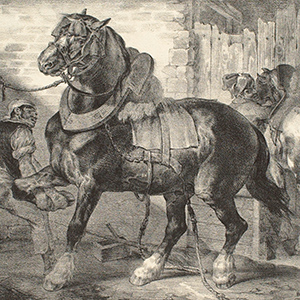 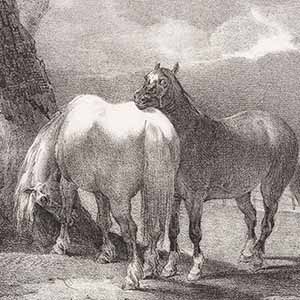