Your browser may not provide an optimal user experience. This website is best viewed using the current versions of Chrome, Safari, Firefox, or Edge.
Juan Muñoz Explore

Stone Hill Center is the site of an exciting new installation of sculpture by the Spanish artist Juan Muñoz (1953–2001), marking a significant moment in the Clark's broadening embrace of contemporary art.

During his twenty-year career, Muñoz invented a mode of storytelling through objects that spoke to space, memory, and displacement. His very first sculptures used an architectural language of disappearance and loss—wood banisters in unused spaces, metal balconies shrugged off from buildings—while his later works introduced figures that programmatically resist attentiveness in order to push absorption out into the viewer's precarious and lived space.

The Clark's Stone Hill Center provides a contemplative setting in which to encounter Muñoz's works anew and to consider the dialogues that these enigmatic sculptures have with the art of the past. In addition, two special installations within the Clark's permanent collection galleries will provide intriguing considerations of the connections between works done by modern masters and those who came before them.

Juan Muñoz was organized by the Sterling and Francine Clark Art Institute. The exhibition is curated by Carmen Giménez, Stephen and Nan Swid Curator of Twentieth-Century Art at the Solomon R. Guggenheim Museum, New York, with independent curator David Breslin for the Clark. 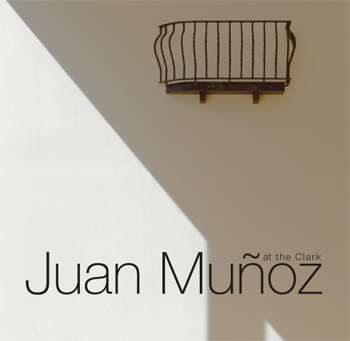 Juan Muñoz at the Clark

The enigmatic sculptures of the Spanish artist Juan Muñoz (1953–2001) invoke a mode of storytelling that speaks to memory and displacement. His works create immersive settings where the viewer is both attuned to the immediate time and context and imagines the architectures and landscapes from which the works might have been expelled. In the unique parklike setting of the Clark, notions of interiority and exteriority, of perception and absorption, are further enhanced. Works installed within traditional museum galleries, as well as in the contemplative spaces of Stone Hill Center and its adjacent terraces, invite dialogues not only with the viewer but also with the surrounding landscape and collections, challenging assumptions of beauty and pleasure, expectation and surprise.