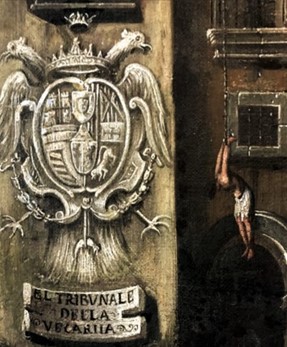 The seventeenth century marked a transformative and turbulent chapter in the history of Spanish Naples. As the second largest city in early modern Europe, Naples endured volcanic eruption, popular rebellion, and plague outbreak. Contemporary paintings chronicled these explosions of natural disaster and human conflict. Violent episodes also took the form of legal expressions, which impacted the sensory environment of the city. A painting by an anonymous Neapolitan artist depicts the sights and sounds of the square outside the Tribunale della Vicaria, the main civil and criminal law court in Naples, and the site of public torture and execution. The painting stages the intersection of everyday life with extreme violence, and the collision of social classes. It offers not a literal depiction of the everyday but an illusion of the everyday, raising the problem of the lived experiences of violence in the city. This lecture will place the Vicaria painting in dialogue with contemporary images of natural disaster and human conflict. Beyond a contrived scene of everyday life, it may be read allegorically as a critique of the judicial order. Simultaneously, the painting functions as a curiosity, with its “catalogue” of actions, activities, and miniaturized figures. It thus reconfigures the legal order, which is imposed and opposed to individual crisis.

Edward Payne is assistant professor in art history at Aarhus University in Denmark. A specialist of the Mediterranean Baroque, he is writing a monograph entitled “Jusepe de Ribera: The Rawness of Nature.” He has organized several exhibitions: Visions and Nightmares: Four Centuries of Spanish Drawings (Morgan Library & Museum, 2014); Between Heaven and Hell: The Drawings of Jusepe de Ribera (Meadows Museum, 2017); and Ribera: Art of Violence (Dulwich Picture Gallery, 2018–19). His research has engaged with topics including violence, skin, sensory perceptions, caricature, and ugliness. At the Clark, he will be exploring attitudes and manifestations of violence in early modern Spanish Naples, whether imagined, depicted, or enacted.