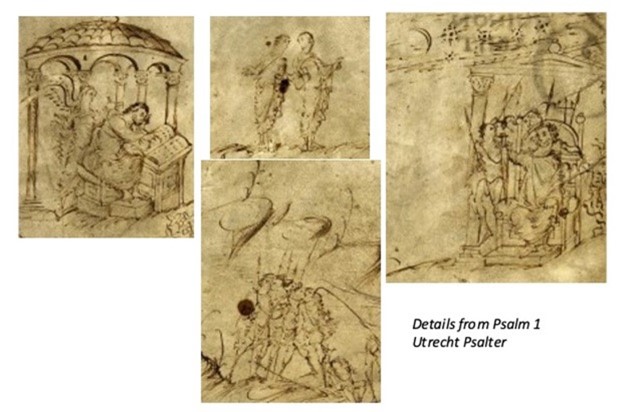 Advice, Revision, and Obliteration in the Carolingian Manuscript of the Utrecht Psalter

If the Utrecht Psalter (UP-Utrecht Univ lib Ms 32) can be described as a performative, lively manuscript with active, dynamically sketched images that set good against evil, prophet against people, farmer against soldier in a setting that can only be described as cosmic and epic, its “copies” tell another story. Erich Auerbach argued that every retelling of a story is a different telling and each of the manuscript versions recasts the message of the Psalms—perhaps the most important book of the Old Testament for Christians. From a book of prayers used to teach reading, a book often memorized and one that served as a source of authoritative passages, the later medieval copies of the UP transform its image program from a book of counsel for kings to an unmistakable delineation of ecclesiastical power. This talk considers methods and possible means of interpretation of this UNESCO heritage “monument.”

Cynthia Hahn is professor at Hunter College and the Graduate Center of CUNY. She has held fellowships from NEH, CASVA, and the IAS, among others. Her books include studies on reliquaries: Strange Beauty (2012), The Reliquary Effect (2017), and Passion Relics (2020), as well as others on manuscripts, rock crystal, and jewelry. At the Clark, she will complete a book on religious jewelry for Reaktion: Precious Things: Making/Marking the Christian Body, and commence an examination of the Carolingian manuscript, the Utrecht Psalter, in its political and religious environment.