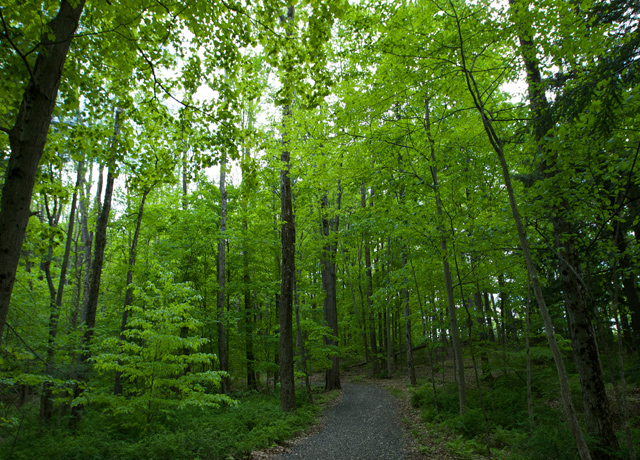 With 140 acres of expansive lawns, meadows, and woods, the Clark is surrounded by profound natural beauty. The windows of its galleries afford views of woods, fields, farm pastures, and a lily pond. Walking trails traverse the property, including trails up historic Stone Hill, which offers a spectacular view of Williamstown and the Green Mountains of Vermont to the north.

Preserving the landscape’s natural beauty and innate characteristics was a priority of landscape architecture firm Reed Hilderbrand and architect Tadao Ando during the dramatic redesign of the Clark’s grounds in 2014. Another consideration was how people would interact with and care for the landscape over time. The plan underscored the Clark’s commitment to environmental stewardship by significantly enhancing sustainability initiatives across the campus and integrating green design practices, and in 2016, the Clark Center earned LEED Gold Certification.

The Clark employs a multifaceted effort to manage the landscape and find a balance between aesthetics and sustainability. Within the landscape’s park-like setting, traditional lawns serve as recreation areas and surrounding expanses of long meadow grass lessen fossil fuel consumption; create habitats for ground nesting birds, insect life, and rodents (which, in turn, provide food for birds of prey); and aid soil health and groundwater runoff.

Promoting healthy soil is a priority. Natural materials such as dehydrated feathers and compost feed the meadow and lawns, and injections of beneficial fungi create a habitat that mimics the forest floor and creates healthier soil over time. Synthetic additives may be used for new plantings, helping them become established and giving more sustainable approaches time to begin working—lessening the need for artificial additions in the future and promoting the soil’s long-term health.

Other key elements of landscape management include substantial new plantings, including one thousand new, largely native trees over the past ten years, and the concurrent removal of invasive plants; expansion of and upgrades to the existing network of walking paths and trails; a new entrance drive; and landscaped parking areas that accommodate 340 vehicles.

Our commitment to sustainability is a promise that sets us apart, with rewards that benefit all visitors, both present and future. Each year creates new challenges in managing the Clark’s campus: as the climate changes, so does the landscape’s response.

Several measures have been implemented to help offset water use, including a series of green roofs and a drainage system beneath the terraces. Water is captured and filtered into a holding tank, where it is recycled for irrigation in the summer and later used for a graywater system, which repurposes non-potable water in the winter months. Rain gardens carry surface water into the garden and slowly release it, recharging the site’s groundwater, helping to stabilize the water table and lessening the burden of stormwater runoff for many nearby streams and rivers.

The reflecting pool that is the centerpiece of the campus is part of a complex hydrological plan that reduces water consumption by one million gallons per year—a reduction of 50 percent. Water-permeable parking surfaces capture rainwater and snowmelt, feeding an in-building 175,000-gallon reservoir that flows into the pool to maintain appropriate water levels. On rainy or snowy days, excess water that collects in the reflecting pool can be recharged back into the ecosystem after it has been cleansed in the reservoir, ensuring that no contaminants enter the brook flowing across campus. The pool also connects to cisterns fed by rooftop collection basins that capture rainwater for use in the campus’s cooling tower and reservoir. Non-potable graywater is utilized for plumbing and irrigation.

The ground-hugging Clark Center absorbs heat through its thermal mass. A series of seven geothermal wells installed on the campus reduces the Clark’s consumption of electricity and heating resources by twenty-eight percent.

These programs, coupled with green roof areas on the Clark Center and the use of green materials (including LED lamps, a Lutron dimming system, and FSC-certified oak flooring) in the building projects herald a new level of environmental stewardship.

The Clark’s latest move toward creating a sustainable landscape was the addition of bees to the campus in 2017. This implementation dovetailed perfectly with the Clark’s sustainability initiatives and brings further attention to the worldwide concern about pollinator health.